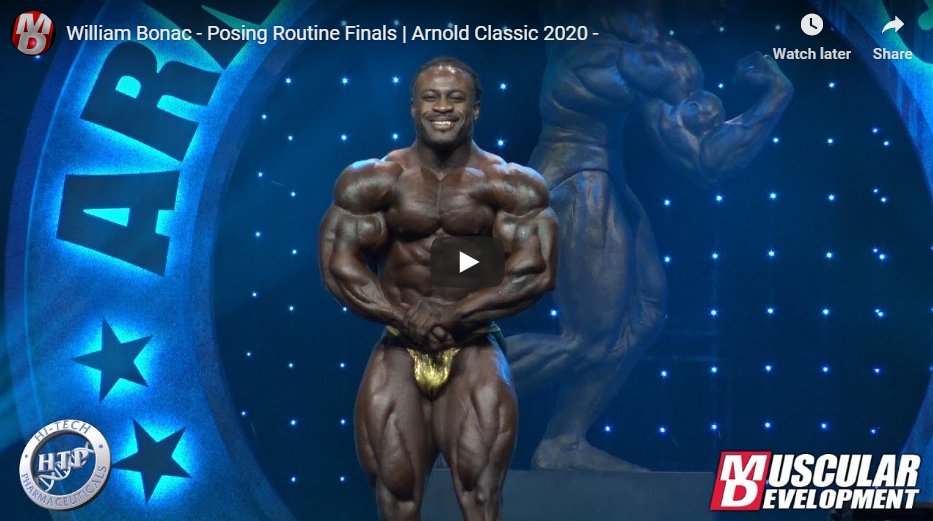 Fans all around the world went nuts after they saw William “The Conqueror” Bonac win his second Arnold Classic title in Columbus, OH, this past weekend. Bonac has become, without any doubt, one of the best bodybuilders of his era. He won his first Arnold in 2018, narrowly losing in 2019 to future Mr. Olympia Brandon Curry, and reclaiming the title in top form this past weekend. The 2019 Olympia runner-up left no stone unturned for this prep, doing very little talking, and really focusing on the work at hand.

William has never been a trash-talker and as a result, he often doesn’t get as much fanfare as he rightfully deserves. That doesn’t seem to phase him much, as he’s made it in the sport his way, and earned the respect of champions past and present. One champion who truly shows him a great deal of respect and who Bonac went to bat for after his 2019 Arnold victory, is Mr. Olympia Brandon Curry. Curry and Bonac have a very special relationship, in that Curry is the best and Bonac is his number one contender, yet both get little respect from the industry press. Nonetheless, they’re the two best. And that pecking order was solidified this past weekend, as Bonac won in top form, bringing his best for the prejudging, the night show, and individual routines.

It Is said that all that matters is who wins, but when you win like The Conqueror did at the 2020 Arnold Classic, well that just feels extra good. He was never in a position where he had to come out of a deficit, there weren’t any challengers he had to avoid, and his whole prep came together beautifully on show day. Whenever a champion comes in conditioned, injury-free, and his mind’s in the game, then that’s a jackpot. So what’s next for the #1 contender? Hopefully the naysayers have finally been silenced!

That being said, whenever the bodybuilding press brings up and goes nuts over a Phil Heath comeback, that does two things. For starters, it dismisses the achievements of reigning champion Brandon Curry. It’s Brandon who won in 2019 and it’s Brandon who’s doing the business of bodybuilding, promoting the sport, and growing it. Whenever the media brings up and goes nuts about Phil Heath, it’s as if Curry is nothing! But journalists constantly bringing up the Heath/Curry showdown also undervalue William’s #1 Contender position, and here’s why.

William Bonac is the #1 contender. No other man deserves that distinction. William now has two Arnold Classic titles and is last year’s Mr. Olympia runner-up. Whenever any reputable pundit does any 2020 Olympia handicapping, the very first name that should come to mind against Brandon, should be William. The 2020 Arnold Classic should be a strong reminder of that pecking order, because Bonac defeated a sharp-as-ever Dexter Jackson, he bested a 300lb in-shape Big Ramy, he defeated an ever-improving Steve Kuclo and many others. Sergio looked his best, posed like his father, and was included in the list topped by Bonac. No one in that contest, with the exception of Dexter, was battling the champ. There have been Arnold’s that were weak, some that were pretty good, and some (like last weekend) that were memorable and noteworthy. Still, it’ll only be a matter of days before the major pundits are once again talking about Phil Heath and Kai Greene comebacks, whether Ramy will nail his condition, and/or even speculating where Kuclo, Sergio, and even Akim can go from Columbus, with regard to the 2020 Mr. Olympia. No matter what Bonac does, he can‘t seem to catch a break.

The media has a tendency to overlook Bonac, much like it did historically with Brandon Curry and especially with Dexter Jackson, because they’re low key, hard workers. You know, I wrote articles, published stories, and talked till I was blue in the face. I said Dexter would be ignored, I said Dexter would come in crazy conditioned, and I said Dexter would beat all the guys the media was saying would beat him. I’m part of that media, but I most certainly don’t ever ride the bandwagon. The year I predicted Shawn would win the Olympia, most of my esteemed media colleagues were speculating whether he’d even be in the Top 5. And it’s not that I have the eye and they don’t; they simply would rather be in the business of hype and smoke, than giving the real champions their right due.

Some will say Bonac’s too short, others will say he’s not big enough – it’s just a never-ending bunch of bullshit. What does William Bonac have to do? What’s crazy, is that for as good as he looked this past weekend, he’s looked better!! Can he improve? Absolutely!! Who is he working with? Who the hell knows?!?! Maybe he’s self-prepping, along with some minimal assistance from some trusted friends. That may in fact be the case.

Can Bonac win the Olympia? Of course he can. Why is that even a question people are asking? In fact, I could see Bonac and Curry battling it out once again for the top title in the world. Brandon has the undeniable advantage of taking the whole year to prep, an advantage that Roelly Winklaar also has, but Bonac knows his physique and he knows what he’s capable of. Should most top tier competitors peak twice at this level in one year? Probably not, but there are exceptions to every rule. I do hope this is it for Bonac, competitively speaking, until the Olympia, but you never can tell. It is very impressive that even at about 90-95% he was able to win everything. If he can peak at a 100% in Vegas, next to Curry at 100%, this could be one of the closest, most competitive Olympias of all time. But don’t worry, the old-timers will still be ready to talk shit, and keep themselves relevant, the second it’s over. You can count on that nonsense, like clockwork.

So what did you think of Bonac’s big win? Do you think he can peak again, even better, for the 2020 Mr. Olympia? And if so, where do you see him, in terms of battling reigning Mr. Olympia Brandon Curry?