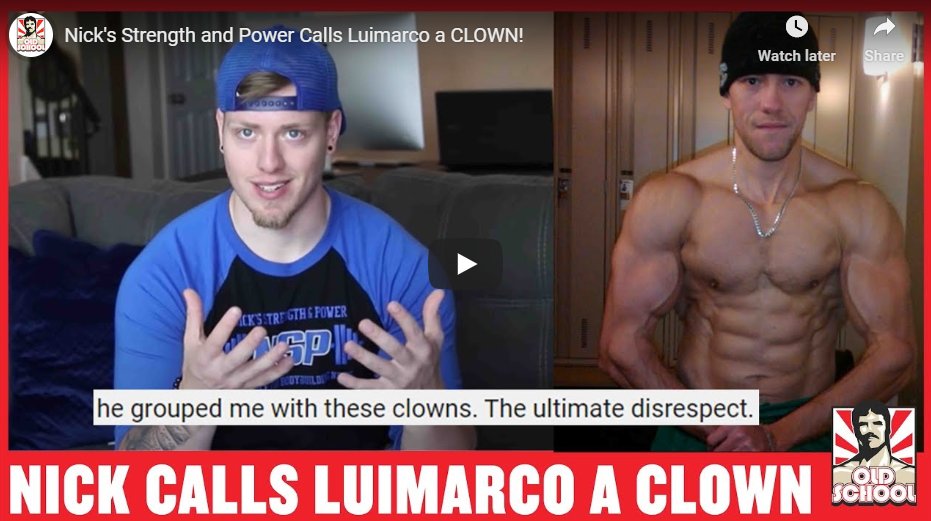 It seems that two of the biggest fitness industry social media stars are on the verge of all out war. Luimarco was the trendsetter. He created a following through the trolling of pro bodybuilders, developing his own lingo, and strengthening ties to a viewership that all but idolized him. Many of the early fans were folks who, initially, loved being on the MISC at Bodybuilding.com, but needed something more. The first super successful channel to create a subculture for fitness-minded youths, were The HodgeTwins.

Over time though, these guys started moving into sampling food, politics, and creating more and more back-up channels. When Lui hit the scene, it was all him, there were no fancy intros, no special effects, you just had a guy talking into this computer, with a thick accent, and lots of energy. At the height of his reign, Lui had roughly 300,000 subscribers on Youtube, landed a major supplement contract, and began to get courted for appearances by influential movers and shakers in fitness, in particular in Kuwait and Bahrain. As Lui began to break every record known to social media, a younger Youtuber from the Cincinnati area began to emerge, his handle was Nick Strength And Power. Lui took an interest in helping the young Ohioan, taking him under his wing, and advising him on what to do to break big. In no time, Nick began to develop an audience. The two, it seems, have been cool with each other for years, but when Kai Greene posted to social, lumping Nick, Lui, and Kenny KO together as TROLLS, it seems Nick replied, that he didn’t like being lumped in with those clowns. This response has sparked what many believe will be an all out social media war. As millions of viewers have no contests to compete in, no gyms to train in, and are bored to tears, with plenty of time on their hands, this could mean a lot of people glued to their phones, weighing in, and creating a lot of drama throughout the net. In this article I’ll discuss everything Lui did for Nick, why Nick really shouldn’t want to battle with Lui, and my personal issues with both of them.

Initially, Luimarco was the man, he had everyone wanting to talk to him. Pro bodybuilders started to take notice, as his channel easily surpassed many bodybuilding networks. He wasn’t backed by any company and he didn’t really come from a journalism background. He was a lifestyle coach, a natural bodybuilder with the ability to get very ripped, and he used YouTube to communicate with those clients and gain news ones in the process. When Lui started trolling pro’s for their bubble guts, his audience blew up. From there he started calling out (allegedly) fake natties. Essentially, the channel started out as being a clearinghouse for trolling, but slowly, as Lui became friends with the biggest bodybuilders of the day, the direction of the channel became more positive. When he started breaking news stories, then he put many of the industry’s networks at risk. From here, he was on the verge of landing a big supplement deal. Initially, I believe his DIY roots put off the business side of the venture as much as possible, but in the end, getting paid for what you love to do, is a nice plus. Marco was always making Google Adsense money, which is based on the # of views, Likes, subscribers and comments, but with a supp company, that money is guaranteed. In time, he was making industry money, Adsense money, and his personal training business was booming. It was during this time that a young kid, with a real nasally voice started imitating him. That snotty sounding geek was Nick Miller.

Nick Miller got started making videos praising the bodybuilders of the Golden Era. Like Lui, Nick was a natural bodybuilder who wanted to be a mover and shaker in the fitness world. While videos from the Golden Era do well, they weren’t going to catapult him to the top, so he simply started copying the biggest name in the game – Mr. Marco. Initially, these attempts did little to grow his following, because the last thing people online reward is a copycat. Nonetheless, Lui’s fans started letting him know more and more about this new, young wannabe. Had Lui wanted to basically write him off, we would never have heard of him and I certainly wouldn’t be writing this article; however, Marco saw something in the little man from Cincinnati and took him under his wing. He even told his faithful supporters to look into the kid’s channel, give him a chance, and many not only did, but they subscribed. If anyone attacked Nick, Lui made it clear that he had Miller’s back. Quite frankly, Luimarco paved the way for Nick and by doing so, undoubtedly created interest in him throughout the industry. When Youtube began limiting ad money on bodybuilding videos and in some cases demonetizing fitness videos altogether, some of the biggest names in the fitness world reduced the number of videos they made. It was a very noticeable reaction, with Lui ultimately deciding to take an indefinite hiatus. Once this void was created, Nick filled it. He got his subs up to 750k+, he landed a contract with the same supplement company that backed Marco, and he inherited all the relationships with the big names in the industry. In effect, Nick filled Lui’s shoes, and did so with Lui’s blessing.

My issues with each of them are as follows. I was very critical of Luimarco because I didn’t understand his style and didn’t like how he trolled respected bodybuilders as he was on the ascent. At the time, I oversaw Ironmag TV, and I was joined in my skepticism of Lui, by Gregg Valentino. If you guys recall, Gregg and myself were also doing videos for MD (sponsored by IML) at the time. When Ron Harris asked Luimarco for an interview, he basically denied Ron, because of the fact Gregg and myself had been so critical of him. That really annoyed me. I had always had issues with Lui’s whole approach, including the fact he trolled William Bonac heavily, but the issue with MD was the needle that broke the camel’s back. I cut ties with Lui and as a result inherited tension with Nick Strength And Power, who for all intents and purposes, carried on Lui’s legacy. When I met Nick at the 2019 Olympia through our mutual friend, Hector Mendoza, I thought we were cool. I buried the hatchet, we followed each other, and I spoke to him here and there. That being said, I did notice his content was getting a little stale and I did notice he was getting softer-worded over the last few months. I was objective, as I always have, insofar as my mentions of him in my work. The fact is, I’m currently blocked by Nick and I really don’t have the faintest clue why.

The fact that Kai Greene, the most popular bodybuilder in the world, holds Nick in the same regard as Lui and Kenny is interesting. I, personally, don’t think Nick should bark up that tree; nor do I think he will. Kai makes a lot of money for the guy who basically owns Nick. We’ll leave it at that.

Over the course of the last year, Luimarco has attempted to stage a series of failed comebacks, but found himself unable to reclaim his former glory. With most of his videos barely hitting 5k-10k views on release week, it seems the fans he lost to Miller, he’s lost for good. Nonetheless, Lui’s protege must either be resentful over something or terrified that The L.U.I. may in fact take back his position as the King of Fitness Youtubers. The bottom line is, people are bored and drama will always be a fun way for bodybuilding fans to pass the time. What will happen next? Who do you side with? And who do you think will prevail? Whatever happens, I’ll keep you posted.