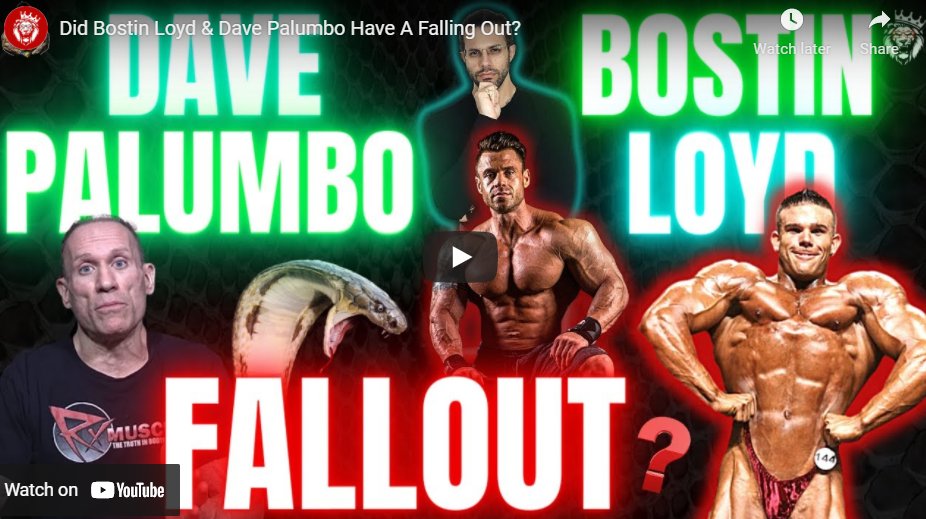 It’s funny, but I often associate people with places – or vice versa. Whenever I think of Bostin Loyd, for example, I think of him at RxMuscle. Whether at their NY studios or there sprawling FL HQ, some of the best interviews and appearances the man once know as Big Daddy B made, seemed to happen alongside the bodybuilding legend, simply known as, Dave “Jumbo” Palumbo.

Although Dave is no longer push 300lbs and twenty years have passed, he continues to be a driving force in bodybuilding media. Together, Loyd and Palumbo made a great team. There was undeniable love between these two iron superstars. If I had to put my finger on it, I’d say their relationship was that of an uncle/nephew dynamic, and times, even fraternal. Back in his heyday, Dave was very much the guy who pushed the card. He put on slabs upon slabs of muscle, trained legs like no others, and had no issues sharing his secrets with the world. This is why he was perfect to spearhead Muscular Development Online, becoming it’s first online editor in chief. People, myself included, tuned in because Dave was saying things no one else was. You could almost count on that unfiltered, no holds barred kind of commentary whenever you visited RX Muscle. As the years passed and Palumbo’s path changed, others notables helped create interest in the website. In many ways, I considered Loyd to be an extension of The Whack Pack – he was a regular that people associated with Dave and his site.

Guys like Bostin breathed new life, it gave a website largely catering to old men, something for the younger generations. Guys 35 and under tuned in to see what Bostin would say. Even many of RX’s most loyal viewers (in the 60-85 category) also took a liking to South Florida gearhead. Much like Dave in his heyday, there were no limits to what Bostin would say, and at the time Palumbo couldn’t get enough. Bostin wore Species shirts and enjoyed Species products, he was on RX all the time, and he was constantly used by Dave. Oddly enough, I think Bostin’s outspokenness started to get old and his work with rival YouTube channels, may have planted the seeds of disdain. When Xavier Wills covered the potential feud on his wildly successful Desktop Bodybuilding channel, I knew it was time to weigh in on this matter, for you, the loyal readers of Iron Magazine.

Although i wouldn’t call this a feud at this point in time, I must preface this point carefully because a feud could come about at any point. While many of us believe there’s a very strong bond between these two, that much we can say has been debunked.

In a recent interview, Loyd stated he wouldn’t ghost Palumbo or avoid his calls, but also said stated that the two hadn’t spoken and that he had lost a lot respect for Dave. That last part is what’s taken the industry media by storm. If these two went at it, it could be an all out tit-for-tat that could get very ugly. In addition to appearing on RX, Loyd has appeared on a number of smaller outlets, even working at one point as a columnist. Unlike another members of The Whack Pack, Bostin has options when it comes to getting the word out. In fact, Loyd has learned how to maintain strong links to his followers in spite of being restricted and/or banned from popular platforms like Facebook, YouTube, and others, whether for short durations or indefinitely. This is because Bostin got started right before social media broke big. This is significant because while most influencers today, would be totally sidelined if they couldn’t use IG or The Clock, Bostin would be just fine.

It’s clear to Dave that he needs to get out and get ahead of this potential spat. In typical Palumbo form, Dave tried to play down Bostin’s comments, making the case that this petty and beneath him. Flanked by RX’s senior statesmen, Chris Aceto, the two spoke about positivity, not dwelling on critics, and moving forward. That being said, Palumbo couldn’t resist putting Bostin in his place about comments he made regarding a GoFundMe page that was started out to help Dusty Hanshaw.

It’s not so much about what Dave said, rather, it’s more so about what he wanted to and didn’t. It’s clear that Loyd hit a nerve and Dave really wanted to lay into him, but chose not to. Dave Palumbo 10 years ago would have been a different story, but today, going to war with someone as popular as Bostin, would be bad for business. If anything, Dave played it exactly as he should have. But who knows if even what little he said, may have been too much?

So far, no one has really grilled either guy and so long as no one does, I don’t expect there will be much trouble. I’m also not surprised that Nick Strength & Power has largely ignored the story. MD could possibly cover it, but Steve Blechman has amassed such a jaw-dropping media empire, that to assign legendary writers like Ron Harris to write on either of these characters would seem wasteful. Then again, summer is upon us, so it’s possible if the magazine has any interns, they might get assigned to do a write-up while waiting for the coffee to brew. As Steve would say, “it’s all happening at MD.” And it is!! I just bought the issue new a couple days ago.

Nonetheless, while covering a potential Loyd/Palumbo feud might be as newsworthy as watching paint dry on a wall, we know our readers find it delightfully entertaining – and I’d admit, it’d be interesting to see what all would happen. All things being comsidered, I’d think they’d both end up losing. This might have been something 5-10 years ago, but with more and more channels springing up, things stating to go back to normal, not to mention that summer is here – no one wants to follow a spat online.

Hopefully these two good friends jump on a call and bury the hatchet. I know Dave loves doing so on shows (for hits), but these guys know way too much about each other. Plus, one wrong move and these guys could go from friendly to hostile in just a matter of seconds. When tensions are this high, it might make for great television, but it might also be way too risky to chance. I think what’s needed is a heart to heart, low key, man to man conversation. If that happens, I think that will be the only way to save this friendship.

What’s your take on the Boston Loyd / Dave Palumbo impasse? How do you think they should proceed?