DID BIG LENNY REALLY BREAK A BOTTLE ON HIS HEAD? 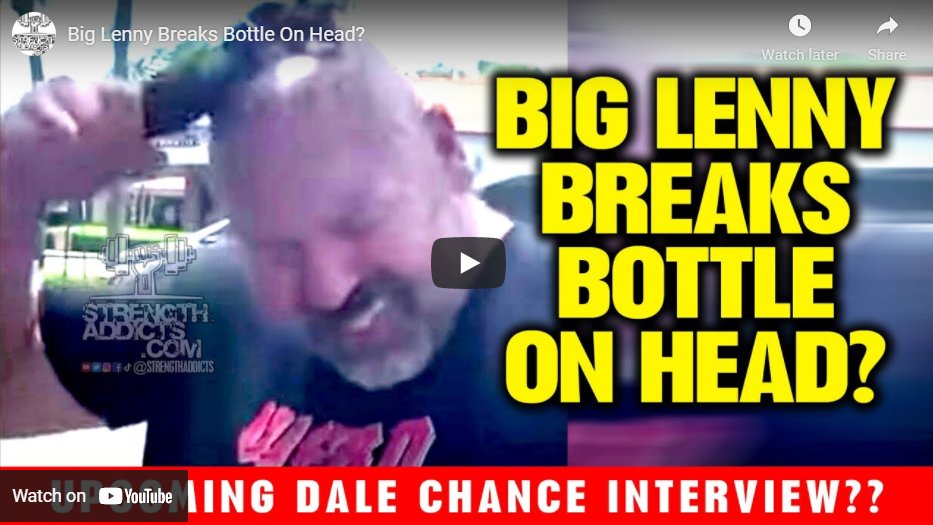 Remember when the fitness industry was all about muscle, great lines, and fantastic posing? Ah, those were the good ole days, before social media. Back in the day, the magazines reigned supreme and unless you were truly newsworthy, you didn’t make it onto those glorious pages. Anyways, in the social media dominated days, it’s all about getting attention, more attention, and ultimately being what is known as, an influencer.

I have news for you. A lot of the alleged biggest stars in bodybuilding don’t get recognized, no one wants their autographs, and no one is going to wait in line to meet them. When you look at a guy like Big Lenny, however, he gets mobbed!! Everyone wants to meet him, talk to him, and it’s getting to the point where the guy needs an entourage. If it weren’t for Andrew filming and Brad attending to his affairs, Lenny would probably lose his mind. At one point in time, it was believed that Jason Genova (aka The Sith Lord) was the main force behind The Delray Misfits, but that was probably the mischaracterization of the century.

The truth is, Jason and the Misfits run on parallel roads. They seldom, if ever, cross paths these days, but both are doing big things. Back in 2014, when I wrote 80 episodes of Muscle In The Morning, there was no mention of Lenny, Jason, or the Misfits. Still, at that time, Dave [Palumbo] didn’t see them as bodybuilding-related. Not only wouldn’t he report on them, he barely acknowledged them. Over the course of time, however, Dave saw how smaller outlets were utilizing this motley crew of jokesters. Wherever they went, hits and engagement followed. It wasn’t long before Lenny, Andrew, and Brad were at Dave’s sprawling residence and of course, the international headquarters of Species Nutrition. Lenny and co. had made the big time and this was just the beginning of it all. Soon, Lenny would make various appearances on RX, winning over many of their most hardcore fans (in the 60-85yr age range). In fact, it was on RX that Lenny – may or may not have – broken a bottle over his head – on air!!

Dave Palumbo is a top name in bodybuilding media. Here’s a guy who made it big after being fired by Steve Blechman at Muscular Development. When Steve threw Dave and John to the curb, Dave bounced back. He knows what it’s like being the underdog, being laughed at, and being laughed at some more. When it was all said and down, I think Dave saw real promise in Lenny, Andrew, and even the lesser members of their entourage. It got to a point where Dave wanted more and more Misfits on RX platforms, but that hospitality came with a price. If these guys didn’t bring the hits, would Dave still talk to them? I would say no. I’d say he’d have to acknowledge them after having had them on so much, but their friendship would be a distant one, if that.

I think it’s sad that Leonard felt the need to pull off a stunt like this. Veteran RX Muscle cohost Juan Romano was skeptical. He didn’t believe Big Lenny had actually done it; Gregorio Valentino also chimed in. The truth is, with the pandemic raging on, it would have been extremely reckless if Leonard had truly smashed a bottle on his head; however, even if he didn’t do it, RX still carried the story. Out of all the people that saw the piece, it’s safe to assume that at least a handful of them must want to upstage Lenny.

Whether he actually smashed a bottle on his head or not – some people, super impressionable people, might accept the challenge. And that’s the only time I’d raise concerns over videos such as the one that inspired this article. It concerns me that people will see this and think that’s the norm to getting press in this industry. I totally don’t blame Palumbo, Lenny, or anyone from his camp. They were merely having a little fun, but social media has come to dominate all of our lives. There are people so obsessed with attention, that there’s really nothing they won’t do. This all got started with Jackass on MTV and it’s been a downward spiral ever since. It’s happening in all scenes, so of course it has a place in the world of big muscles and freakish strength.

Many people have taken to the message boards, trying to analyze the video, looking for blood, and trying to discern sounds. I don’t really care all that much. Whether Lenny did in fact break a bottle on his head or not, the point is, it gave him airtime. I also, regrettably, recognize that it got him press through this article at Iron Magazine. I could sit here and brag about our numbers, but I won’t. I’ll just say this – A LOT of people are reading IM, and while I may not want to cover certain topics, I’m a journalist. We don’t get to pick what’s news and what’s not. We answer to the people – and – the people want to know about this.

The truth is, people like to watch The Delray Misfits because they’re against the grain, they know no boundaries, and that’s a huge part of their style. They not only condemn cookie-cutters and cookie-cutter content, but they abhor it. If the Misfits all of a sudden became proper role models, they’d lose a huge chunk of their support. That being said, at what point do you draw the line, at what point do you say that’s too far?

For many, that day and time never comes. For many, particularly those who are getting monster hits, there’s simply no such thing. If you got to the top by being outrageous, well then, you had better outdo yourself or someone else will. It’s like shock rock. I doubt Ozzy or Marilyn Manson ever said, “you know, this might be too over the top.” Once you start thinking like that, you probably go from playing Tiger Stadium to playing the lounge at the local Howard Johnson. Therefore, I do understand that asking The Misfits to tone it down, would be akin to asking Ozzy Osbourne to start singing country love ballads. Still, should stars employ any kind of discretion with regards to what they do?

These are some pretty deep questions, to say the least; questions that I’m sure have been asked in movies, music, and yes, bodybuilding.

Far be it from me to advocate that stars exercise some discretion. It’s not my place to do so; I just hope not to see, read, or hear about someone who tried a similar stunt, maybe actually doing it, and getting hurt. What say you? What’s your take on this news story?