DOES SHAWN RHODEN NEED A NEW GAME PLAN TO COMPETE? 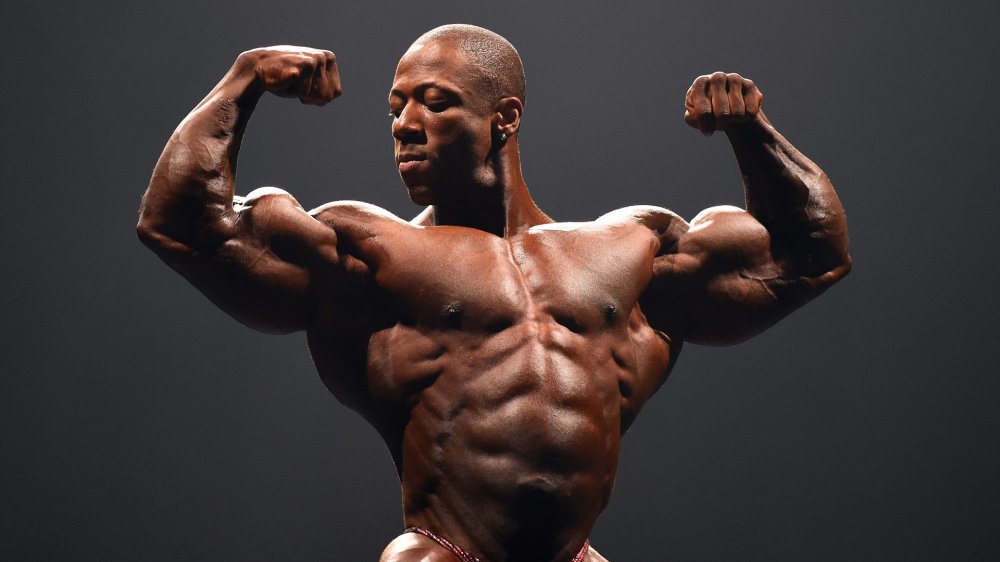 It’s been quite some time since we’ve seen Shawn Rhoden step on stage and wow us with his crazy conditioning. I’m not here to debate his legal situation, we’ll let the courts handle that. But let’s play a little game and imagine what would happen if the lawsuit is dropped and Shawn was able to jump on the 2021 Olympia stage. What exactly would transpire, and how would his physique compare?

Conditioning in a MASS Game

The last time we saw Shawn Rhoden on a bodybuilding stage was in 2018, when he dethroned Phil Heath. Shawn brought a complete package, one that stood out to the judges, and being that Phil was off and having midsection issues due to his hernia, the judges awarded Shawn Rhoden with his first Sandow.

Looking at the pictures, was Shawn the biggest bodybuilder on stage? Heck no, not even close. Was he bigger than Phil? Nope, he didn’t beat Phil in the size department either. It was his overall package and conditioning.

Fast-forward to 2020, and things have changed quite a bit. When Shawn won in 2018, and then Brandon Curry followed up the next year in 2019 with his first Olympia title, the judges seemed to be moving into a more aesthetic and conditioned look. For many of us bodybuilding fans, we thought the Mr. Olympia judges were regressing back to the physiques of more than a decade ago – that was until 2020 hit.

2020 brought us the return of Phil Heath and Big Ramy, two competitors who skipped the 2019 Olympia. There weren’t many people who thought Brandon would repeat, and with the buzz surrounding Phil, Ramy, and Hadi, Brandon really was never even in the discussion.

It seemed as if the moment Ramy took the stage, the show was over. He finally did it. Ramy FINALLY nailed his conditioning yet still brought a physique that dwarfed all of the competitors, turning grown men into what looked like boys. And in that very moment, the judges almost seemed to laugh at us for thinking a smaller physique was what they were looking for.

The mountain of a man that we call BIG RAMY could have just ruined the sport of bodybuilding for 75% of the competitors, as it appears that the MASS MONSTER era is once again shining down upon us. I guess the circus is back, and the freak show will continue.

If you were to look at Shawn’s physique, the last thing that would come to mind is that he’s a mass monster or freakishly big. Ramy, on the other hand, is an entirely different story and animal. If you were to put Ramy and Shawn side-by-side, Ramy would outsize him all day long.

So, can Shawn Rhoden stand on the Olympia stage and take home another Sandow? Eh, I guess you could say, “Never say never,” but I feel like the likelihood is very slim if Big Ramy comes walking out in the condition he was at the 2020 Olympia in Orlando, FL.

But then again, if Shawn Rhoden could take down Phil, there could be a chance where Shawn could take his shot and out-condition Big Ramy while still being big and full. Shawn has placed very well at the Olympia as in 2017 he placed 5th (one of his worst placings for many years), in 2016 he placed 2nd, in 2015 he placed 3rd, and in 2014 he placed 3rd. Essentially, Shawn Rhoden has always been in the running to take home a Sandow, but with the likes of Phil Heath on the stage at his best, Shawn’s chances were always slim.

What Should Shawn Do?

This is actually a really tough question to answer. Again, we are assuming here that he’s going to be eligible for the Olympia in 2021 (maybe a little wishful thinking). If Shawn were to play the size game and play in the same sandbox as Big Ramy, he risks potentially losing the crisp, aesthetic look he currently has. If you were to look at other bodybuilders who played this game, their waists got larger, and they didn’t look the same until they downsized slightly in order to fix their midsection and bring back their v-taper.

Would it help if Shawn Rhoden were to add some more size? Absolutely. The interesting part of this discussion is that other bodybuilders like Roelly Winklaar downsized and looked to go into the 2020 Olympia with a much more conditioned and harder look – unfortunately for Roelly, he got COVID and was unable to participate or even make the flight to Orlando.

Here is my answer (for what it’s worth). Don’t play the size game to the extent where you think you’ll come anywhere close to standing next to Ramy and battle mass – it won’t end well. What I’d like to see Shawn Rhoden do is come in a little (and I mean a little) bigger from head to toe. Mind you, the midsection is going to be his main focal point as his abs and taper are always one of his strongest attributes. Any increased size to his midsection will absolutely be noticed and called out. And remember, it’s Phil’s midsection that really hurt him when he lost to Shawn in 2018.

The main thing I think Shawn can do is just continue to progress while focusing on nailing his condition. When you look at Big Ramy over the years, it’s been his conditioning that has really hurt him. If Ramy comes in off and does not have the same physique he brought to the 2020 Olympia, it’s anyone’s shot to knock him off and take home the 2021 Sandow.

What are your thoughts? Can Shawn Rhoden come back and compete against the new era of mass monsters? Can Big Ramy even hold his 2020 look in 2021 and maintain his title?