FITNESS MAGAZINE APOLOGIZES AND OTHERS PROMOTE BEING FAT AS HEALTHY 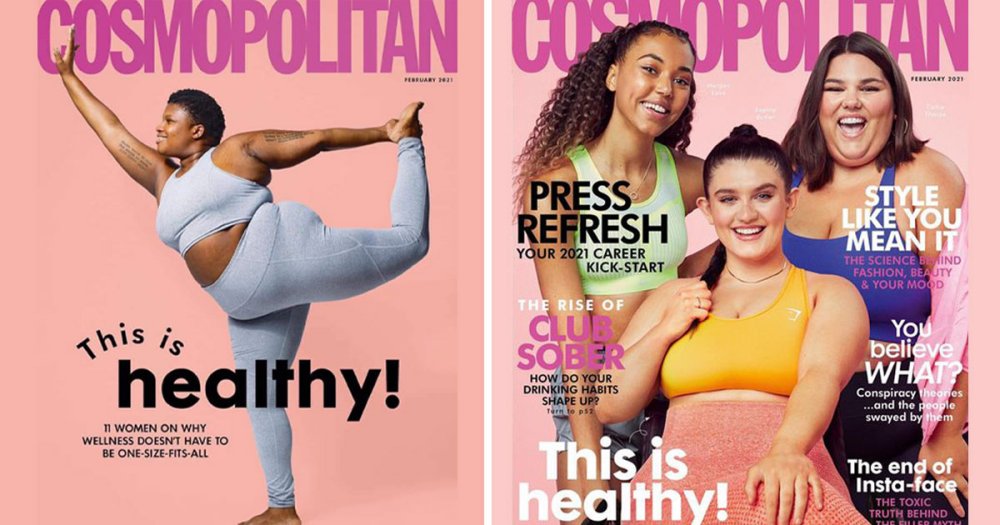 I will start by stating this entire article is MY OPINION, and you can disagree, agree, not give two cow patties, I don’t care. But something needs to be said as this issue has gone too far, and someone needs to speak up. To give you a quick backstory, Women’s Fitness magazine posted on their Twitter account about heading outdoors to “burn off those Christmas calories,” and Cosmopolitan put extremely overweight women on their cover with the title, “This is Healthy!”

There’s so much I want to say, and I’m going to try to keep this article as short as possible since I could probably write an entire book on this topic – that’s how ridiculous it is.

Women’s Fitness Apologizes – For What?

On December 27, 2020, Women’s Fitness mag posted on their Twitter, “Are you getting out for a run, walk or cycle today? It’s a great day to burn off those Christmas calories… post your pics here!” That same day they posted again, saying, “Sorry to anyone upset by our recent post about getting out and burning off Xmas calories. We were trying to encourage you to exercise, share your pics and to not to wait until January if you have fitness or weight-loss goals. We know that not everyone exercises for weight loss.”

I’m so confused. You’re a fitness publication. Why are you apologizing for encouraging people to go out and burn calories that they could have overconsumed during the holidays? It’s not like this isn’t uncommon. Most people put on weight around the holidays and need a little encouragement to go out and get back on their fitness and health plan. And if you’re actually taking the time to read their Twitter posts, you’re probably interested in health and fitness, right? I mean, I don’t go to a crocheting Twitter page as I don’t crochet. Make sense, no?

But of course, you had a ton of snowflakes and psychiatrists out there who were offended by the post and started replying and retweeting with their opinions. Here’s the funny part, those who were offended don’t even look like they exercise. So, they’re just angry and feel bad for themselves and want to lash out. It’s easier to tear people down than it is to change your lifestyle behaviors, right? If you can’t beat them, at least knock them down to your level – isn’t that how it goes?

Women’s Fitness shouldn’t feel bad for their Tweet at all. Instead, those who Tweeted negative comments should be ashamed that they are promoting people to be unhealthy and complacent with their health. You can’t be fat and healthy, it doesn’t work that way.

The cover of the February 2021 Cosmopolitan issue has been released, and it shows an overweight woman with the heading “This is healthy!” (depending on the cover, you see a different woman). The caption reads, “11 women on why wellness doesn’t have to be a one-size-fits-all.”

For starters, the heading on the cover is dangerous and completely unacceptable. Being OBESE is not healthy, I don’t care who’s mouth those words come out of. Know who says those things more than anyone? Those crazy psychiatrists who want to tell everyone that it’s ok to feel the way they do. Well, you can feel whatever you want, but being obese can put you in the grave sooner rather than later. Those are the facts. So, go ahead and love your way into the ground if that’s what you choose.

You can love the way you look at any size, but that doesn’t mean a single thing when it comes to health. So, you can say I’m body-shaming all you want. I’m sticking to my position that being overweight and obese is NOT healthy (even if you are happy with your body image).

There’s a Reason Americans Are Fatter Than Ever Before

Waistlines are getting bigger and bigger, which is causing several health concerns and diseases to people who could have prevented all of these negative aspects from taking place, had they just paid attention to their weight and engaged in physical activity. Heck, even walking could have prevented much of what we see walking the streets today. But then again, you don’t see many people walking the streets because they are too overweight and drive from block to block to do their shopping – otherwise, they get winded and need to sit down to rest.

The American people have no one to blame but themselves. The food on the shelves isn’t making Americans fat. No one is forcing people to eat certain things. People are merely making the wrong choices. The blame lies on them – no one else. McDonald’s isn’t holding a gun to our heads and telling us to order a Big Mac value meal with a large fry and regular sugary Coke. Your car, even a self-driving Telsa, doesn’t automatically pull into a Wendy’s drive-thru.

People need to take personal responsibility. When they get sick or lose their mobility and freedom due to their size, they want sympathy. Sorry, you’re not getting any from this end. You made those choices. You could have gotten help. But you decided to put yourself in a little bubble with your security blanket where you blame everyone else for your lack of commitment and discipline. It’s like someone who says, “Hold my beer,” and then does something stupid. You knew it was going to be a bad idea, and you did it anyway. Therefore, there was a consequence to your actions. The same thing applies to those who refuse to improve their health.

The People Who Need the Most Help Are the MOST Combative

When you look at posts and comments online from people who call “fat-shaming” and “bullying,” they are generally the ones who are unhealthy, overweight, and obese. You rarely see someone fit saying those things (unless they are looking for attention and want clicks or views). Yet, those who are unhealthy are the first to put down those who exercise and eat healthy, saying they are “obsessed” or “too thin.” They feel like what they are saying is acceptable but calling them “fat” or “overweight” will start a civil war.

Those who are fit are the ones cheering on the people in the gym who are overweight and looking to change their lives. They aren’t looking at them differently or as being “gross” like some people view those who are ripped and muscular (which is a whole different topic of discussion we can save for another article).

We need to stop accepting being overweight as acceptable these days – it’s not. Society needs to stop being a bunch of little snowflakes, acting like their feelings are the only thing that matters in this world. News flash, no one cares about your feelings. You’re driving the cost of healthcare up by being lazy. You’re increasing the number of premature deaths in this nation. You’re flooding doctor’s offices and hospitals due to your poor health. You’re increasing the number of preventable diseases due to your poor lifestyle choices.

Something needs to change, and it’s not going to change when we accept this type of behavior and accept being overweight and obese as a new norm because no one wants to speak up and say enough is enough.