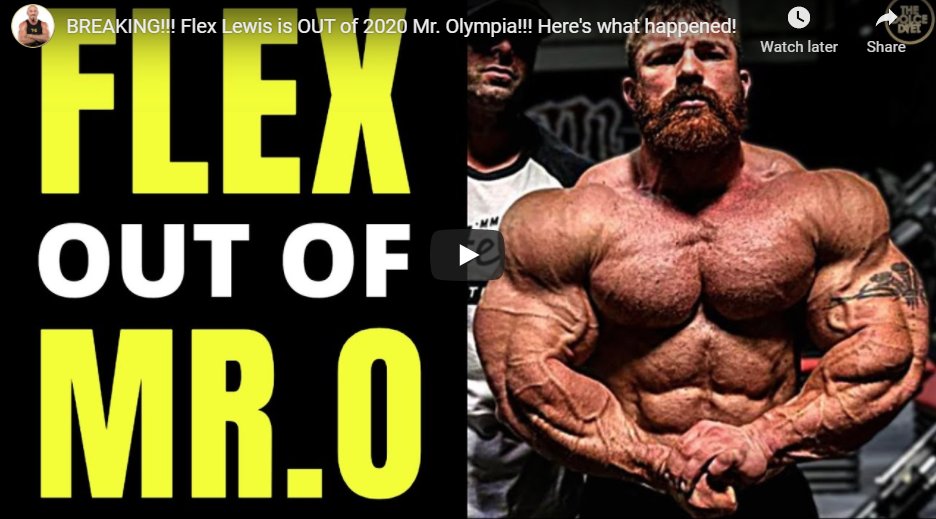 7x 212 Mr. Olympia James “ Flex” Lewis was supposed to make a huge splash at the 2020 Mr. Olympia, but after consulting those he cares most about, as well as self-reflecting, Lewis opted to put his health above his competitive endeavors. I believe that was the right move and I think it took a lot of courage for him to make that announcement before the world. If you don’t follow Flex, you should, but for those of us familiar with his platforms, we get a daily glimpse of just how hard he works for the brands that back him.

There are guys who do the minimum, there are others who do just a bit more. Guys like Flex work for a company like an owner would. Think about it. Many employees work for an hourly wage or a salary. They want to do a good job and they hope to move up; however, it’s just a job. There’s another type of athlete/ambassador who doesn’t just sign onto the team with a few strokes of a pen. There are guys who look to knock the socks off of every company who shows them love, who believes in them. Guys like these don’t tend to hop around companies and they don’t whore themselves to a million brands, looking to make as much money as quickly as possible.

Flex loves the companies he works with, he loves his gym, and most of all, he loves his family and fans. 2020 was supposed to be his year. I had him in the Top 2 with Brandon. That being said, he took care of business; he did what had to be done and just a week ago he made a bombshell announcement. Lewis posted that he was officially getting his 2021 Olympia prep started, he promised to document as much of it as possible, and he gave fans all around the world, the green light. Whenever and wherever the 2021 Olympia may be, The Welsh Dragon will hit the stage. That’s got bodybuilding fans truly excited!!

As the sport gets into a new decade, some of the names from yesteryear are starting to fall off. Legends like Dexter Jackson have retired. Will Phil Heath be next? Many guys may not officially have retired, but they’re increasingly sporadic appearances, all but confirm it.

Competing has never been more expensive, more chaotic, or more uncertain. While we’re told there are three vaccines, there’s no end in sight for face masks, social distancing, and/or the possibility that governments will, once again, clamp down, forcing promoters to postpone/cancel events and athletes to scramble to make travel arrangements. A lot of people just don’t want to chance it, but the sport must go on. Last year, Covid19 sidelined Big Ramy for the contest where he hoped to qualify (like everyone else) for the Olympia. The pandemic cost Roelly Winklaar, perhaps one of the best appearances of his career. That being said, this sport had to carry on, and I believe it really did in 2020.

There’s a lot of faith in Jake Wood, Dan Solomon, and their whole team. Unlike Athleticon which postponed for the following year, the Olympia staff did was necessary, even changing dates and moving cross country, but they were adamant about the most important contest in physique-based sports happening. No one could have asked for anything more at the 2020 O than what they got, well, except for seeing Flex Lewis battle it out in the Top 6.

Some people have said that Lewis could be the next Lee Priest. I think that’s quite a compliment for Priest, but it’s also pretty shortsighted. Lee was never in the mix to win a Sandow, but Lewis is. Structurally, he’s flawless, and he’s been able to build a super dense look, that now, without the confines of making weight, will allow him to almost recreate himself.

Flex is not alone. Unlike a lot of top guys who run through coches, Lewis has one go to guy. In fact, Lewis has been working with legendary coach Neil “Yoda” Hill for such a long time, that the bond they share is one of the key factors of The Welsh Dragon’s success. When there’s that level of trust between an athlete of Lewis’ caliber and a coach of Hill’s expertise, that means that whatever bumps in the road may arise, these two will bulldoze right through it. And that’s not just kind pleasantries – it’s fact. We have seen countless guys totally ruin a perfect prep because of the last 48hrs. We have seen coaches, who marketed themselves as gurus, only to be described after the contest, as clueless, by their very unhappy clients. There’s a lot of smoke in this sport, but there’s been nothing but success for the Lewis/Hill team.

With regards to the contest, I’d hope that the special invite from 2020 would carry over to 2021. I’m sure that if need be, Flex could easily win a pro show in the open category, but just imagine what he could do for a full year, prepping for the big dance. That being said, I’ll put all my cards on the table with regards to getting to the Olympia in that fashion. I don’t like it; I think it’s unfair and I don’t like that there isn’t really any criteria for it. That being said, if Ramy got the invite and won the Sandow, it would only seem fair that Lewis’ invite would also be honored. It’s not like the guy never accepted it or played games with the marketing of the event or announced he wasn’t competing two days prior to the press conference.

Again, not trying to throw shade at Kai Greene, but there’s a huge difference between what Flex had to do and what Greene did. Interestingly, as recently as a month out from the Olympia, there were key people suggesting that Greene should be given another special invite, half a decade after the last. Will the Federation grant a second invite or will Flex petition for it? I have no clue, but like I said at the onset, if Flex needs to win a show, he will. Unlike Nick Strength And Power, who believes Lewis could simply be Top 3, I think he can win everything – 212 or Open.

There is one more reason I think Flex should get the special invite. Although he didn’t compete in 2020, I think it’s safe to say the event needed all the marketing help it could get. That’s not throwing any kind of shade at the amazing team that works the event; however, when the Arnold nearly cancelled and with the chaotic months that ensued, people needed the Olympia to be really, really big. When Athleticon postponed, people became even more skiddish.

Remember, you’re talking about flights, hotels, taking time off work – and that’s just for attendees. Countless athletes had preps pulled right out from under them. Some competitors were so close to the contest they could see the stage lights – and BAM! – just like that, the show was either postponed or cancelled. Although Lewis didn’t compete, the fact he accepted the special invite and became ¼ of the blockbuster 4 Mr. Olympia’s on one stage lineup, brought a tremendous wave of much-needed interest and support.

Listen folks, on any other year, I’d tell you that the Olympia pretty much sells itself. 2020 was a totally different story. That marketing campaign really turned things around. It created an actual light at the end of the tunnel, it was history in the making. It’s my opinion that if Lewis had never dropped out, Big Ramy would never have received a special invite. Flex may not have been able to compete then, but the special invite should remain open to him.

Moreover, the sport needs to revisit the status of The 212, in my humble opinion.

The 212 sits in a very peculiar spot. It’s almost an anomaly, really. While some fans around the world consider there to be 3 bodybuilding divisions, Classic is not bodybuilding. It’s its own thing. The 212, however, is bodybuilding, but seems to be relegated to a secondary status.

Listen folks, rules change all the time, to adapt to what the fans want and in the benefit of improving the sport. The 212 needs to get a lot more love, from more prize money and to being restored at The Arnold Classic, but one move that could be an easy gamechanger, is giving every 212 Olympia Showdown champion a lifetime qualification to the Mr. Olympia, just like all the open winners have, and vice versa. And while at it, let any 212 guys who want to compete in both the Open and the 212, do so. I mean, why not?

While we may not see any substantial increases to the 212 purse, at least the guys who do both, can increase what they can make. I could see at least 2-3 212 guys having a fairly decent shot of cracking the Open Top 10. That’s not only doing right by the athletes, but imagine how much fun it would be. I mean, there were years (as in plural), where I would have done anything to have seen a 100% Flex Lewis compared to a 100% Phil Heath. If they could do it in the 70’s, why not today?

In any event, I can’t wait to see Flex Lewis on the Mr. Olympia stage in 2021 – however he gets there. Where would you place him? Do you agree with me, that he could win it all?