JOSE RAYMOND EYEING UP A COMEBACK TO THE BODYBUILDING STAGE 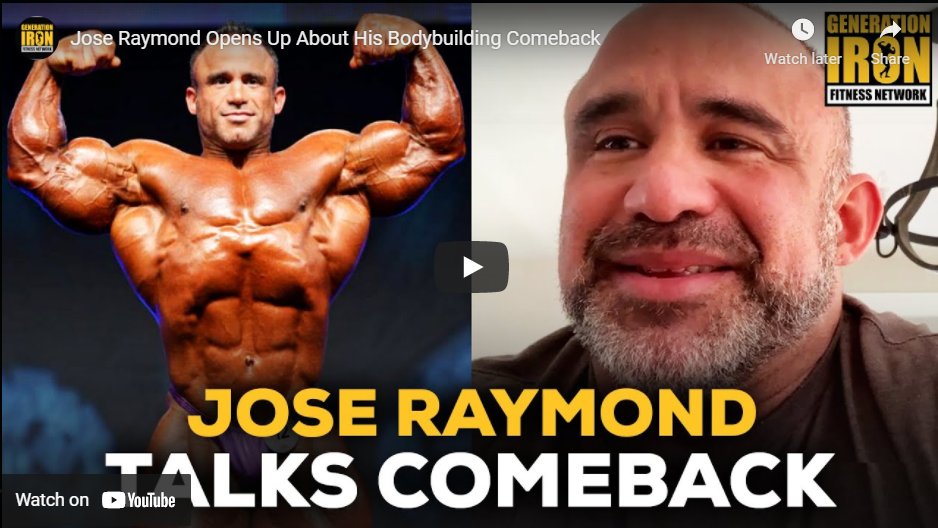 When it comes to 212 bodybuilding, there are some names that will forever go down in division history. You have names like Flex Lewis, who had a run of Olympia wins that I’m not sure will ever be broken. Then you have guys like Guy Cisternino who can grab a mic and get people rolling on the floor laughing. Then there’s Jose Raymond – “The Boston Mass.”

In his early 40s, Jose Raymond decided to hang up his posing trunks after being plagued by injuries, surgeries, and unfortunate setbacks. I’m not sure there’s a single soul out there who has something bad to say about the man. Jose Raymond was one of the hardest working 212 competitors out there and had a long and successful career. After making a pre-Olympia announcement several years back that he would be retiring, it was hard to imagine him not standing in a 212 lineup ever again. Or would he?

Jose Raymond – There’s Nothing Holding Him Back

I enjoy hearing people’s stories and backgrounds, and Jose Raymond has a fascinating background that I don’t believe many people are aware of. For starters, Jose Raymond is the youngest of eight siblings.

As an adolescent, he and his siblings were taken by the state. Unfortunately, fast forward a little bit, and the siblings would be split up. Both Jose and his brother (Tito) were brought in and legally adopted by the Raymond family – separating them from their other siblings.

Jose was active in sports as a child, but it wasn’t until his social worker introduced him to weight training that he found a new passion.

It was said that at 15, he was already 150 pounds and solid for his age. Heck, some 30-year-old men aren’t even 150 pounds. Interestingly enough, a teacher actually made Jose Raymond take a drug test to see if he’s taking steroids since he quickly became the strongest kid in the school.

From that point on, I guess you could say, “the rest is history.” But now, back to your regularly scheduled program without going off on a tangent.

Don’t Call It a Comeback

After healing up from his most recent surgery that caused Jose Raymond to retire, it seems as though his beat-up body has been enjoying some “time off” from bodybuilding prep. Following his last surgery, he mentioned that he lost a considerable amount of weight – not to mention lean muscle mass.

However, without focusing on basically a full-year prep for shows and not having a true off-season, Jose Raymond mentioned that his body is adapting to lighter weights and more volume and feels ready to grace the stage yet again.

Now, let’s not get things twisted. When Jose Raymond says, “light weights,” he’s still pushing some serious weight. He’s just not going as crazy with his training as he once did and is allowing his body to adapt to different training modalities by implementing more drop sets to help fully exhaust the muscle fibers and break them down.

Between the training and nutrition plan, Jose mentioned that he’s seeing significant improvements in his size and muscularity. Some added carbs while maintaining what he calls a “pre-contest diet” seems to be working nicely as his weight has been steadily increasing, and his size is coming back.

The fact of the matter is, Jose Raymond is no spring chicken. I’d never call him old to his face (he’d rip my head off and shove it up my ass), but at 46-years-old, many of the younger competitors may be joking around and asking when he’s going to be signing up for his AARP card. But in all seriousness, I’m not sure there’s a single competitor out there who doesn’t respect Jose Raymond. I was able to meet him on one occasion, and I can say he’s one of the nicest guys I’ve ever met.

A question that has been left unanswered is WHEN will we actually be able to see Jose Raymond hop on stage again? And while we take what he’s said at face value, we really don’t know if Jose will truly be an active bodybuilder ever again. It’s not “official” that he’s coming back, to my knowledge. It seems like he’s talking about a comeback, but until he talks about a show he’s training for, nothing is set in stone.

What’s His Next Show If He Comes Back?

While bodybuilders merely love to compete, it’s hard to think that none of them are thinking about the Olympia and working their asses off to get up on the Olympia stage. Jose Raymond is no exception. I really don’t believe that Jose would put in the time and effort to just do some smaller shows without his eyes being on the bigger prize – going to the Olympia. While he could collect a paycheck jumping into some smaller shows throughout the year, it wouldn’t be the same if he didn’t compete to make his way to the Olympia this year.

Will we see Jose Raymond on a stage in 2021? That is yet to be determined to bodybuilding fans, but Jose seems to be hinting at a 2021 comeback. Which show will he jump into? That’s tough to say. It’s odd to think Jose isn’t jumping into a bunch of shows this year as he seemed to always be weeks away from hitting the stage again. This circles back to his comment of never really having an “off-season” since he was constantly training and working on his conditioning for his next appearance.

Regardless of the show he tosses his hat back in the ring at, Jose is always a threat when he steps on the stage. How will his body look once he diets down after taking a few years off? Who knows? Will he be able to get back all of his size that we are used to seeing him carry around? That’s yet to be seen. But all in all, I’d love to see Jose Raymond back on a bodybuilding stage sooner rather than later.