NICK WALKER VS BLESSING AWODIBU: THE ONLY INTERESTING THING IN BODYBUILDING 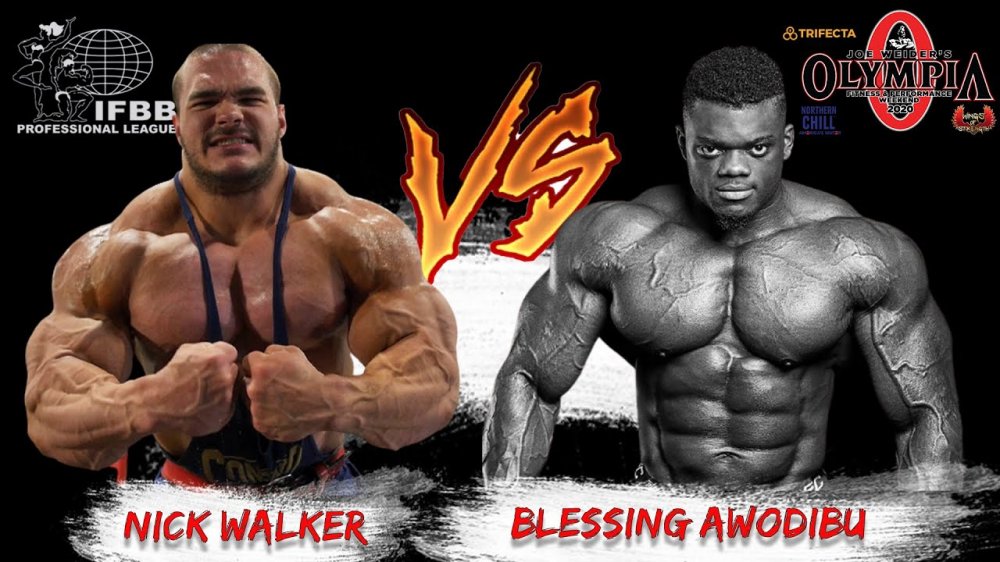 The long-awaited New York Pro is just around the corner, and the back and forth between Blessing Awodibu and Nick Walker is heating up. At this point, it would be quite comical if they both went into the show, and neither one of them ended up winning. But right now, they are the only people keeping the state of bodybuilding from going into a dark hibernation and putting everyone to sleep.

Thank God for Blessing Awodibu and Nick Walker going back and forth on social media – giving us at least a little hope and glimpse of what’s to come this bodybuilding season. Both of these guys have incredible physiques, and I almost feel as though Blessing is pushing Nick to engage with his comments just to create some hype (which is brilliant as it draws attention to them – which I don’t think Nick initially understood). Having the spotlight on them right now is the best thing for both of their careers as it puts all eyes on them. It’ll draw attention to the New York Pro as well as helping build both of their social media followings.

When things started out, there was some good back and forth going on before Nick Walker said he was going to be the bigger man and end the banter – mentioning he’s going to let his physique do the talking on stage. But not soon after his comment that he was bowing out of social media drama, he jumped right back in, and the back and forth between the two continued.

While I’m not over the moon on the thought that these two are going to be the big draw in 2021, they’re the only guys that are making people want to put their butts in a seat and watch the show to see what happens and who potentially takes home the win. The physiques on these guys are downright outrageous, and I think overall, they both have a bright career ahead of them.

But it makes you wonder what the heck is going on as it seems like SOMETHING has to be stirring behind closed doors, right? I mean, we are hearing nothing. Dexter, one of the best bodybuilders to ever walk on a bodybuilding stage retired, Shawn Rhoden may still be unable to compete this year, and who knows about Kai Greene (I cringe every time I say his name anymore) and Phil Heath’s future in the industry?

Who’s going to step up and make things interesting? Heck, I’m enjoying watching Flex Wheeler’s training videos more than any current competitor that we’ll see on stage in 2021. Someone do something, please!

Here’s a light callout to everyone else in the industry… WHERE YOU AT? Even before the big social media movement hit, we had guys like Ronnie Coleman and Jay Cutler, even Jay and Phil Heath keeping things exciting. Dare I say, even Kai Greene added some excitement to bodybuilding before he retired, stopped competing, toyed with the fans, whatever you want to call it.

There’s NOTHING going on in the industry these days that is making any news or real headlines. The sport is stagnant. Then comes along two up-and-coming phenoms in Blessing Awodibu and Nick Walker, who have at least made things a little interesting the past few months.

The biggest news to come out over the last few months was the Hadi Choopan video that made it seem as though he will be retiring. While I think the smoke has cleared on that front, it appears the video was more voicing his opinion about his country of Iran, not backing him and showing him any respect for what he’s done and accomplished as a bodybuilder (and I don’t blame him). Needless to say, and from what I’m hearing, Hadi isn’t going anywhere and isn’t planning on hanging up his trunks just yet. And it’s my opinion that one day he has the potential to win the Olympia.

The Shawn Rhoden issue is still there where we have no idea what his status is for the 2021 Mr. Olympia, who knows if and when Phil Heath will jump back on the stage after his lackluster performance at the 2020 Mr. Olympia, and no one else is making much noise these days.

Maybe Something Is Brewing for the 2021 Mr. Olympia?

It’s been beaten like a dead horse that Kai Greene is hinting at a comeback. He just signed on the dotted line to be a Redcon1 athlete, which raised a few eyebrows as to what the future holds for Dynamik and if the brand will dissolve this year due to a potential lack of sales. But what if he DOES finally come back to the stage, and what IF he hasn’t missed a beat with his physique?

We’ve all seen the pics of Kai lately – he looks great. In fact, he seems stage-ready at nearly any point. Recently he’s made a few comments and posts that made people wonder if this will be the year The Predator makes his return. And the fact that Phil Heath slid back in the placings at the Olympia, Kai may see it as an opportunity to FINALLY beat Phil. Obviously, in order to take home his first Sandow, he’d need to get through Big Ramy first.

Something else that I think many of us have been waiting for that we might see this year is the return of Flex Lewis – only this time in the Men’s Open division. While Flex really has nothing left to prove, it will be interesting to see what a few off-seasons can do to his physique and what he’s capable of bringing to the 2021 Mr. Olympia. How will he compare to Hadi, Ramy, Brandon, and even Phil or Kai if they step on stage? That alone might be something even more people are looking forward to than seeing a Blessing Awodibu versus Nick Walker showdown.

No matter how you slice it, things need to heat up. I’m hoping that as we move into the warmer months, the bodybuilding industry will start to heat up, and we’ll have some good stories to share and look forward to. Until then, I guess we all just get well-rested and wait for the firework show to take place at some point?