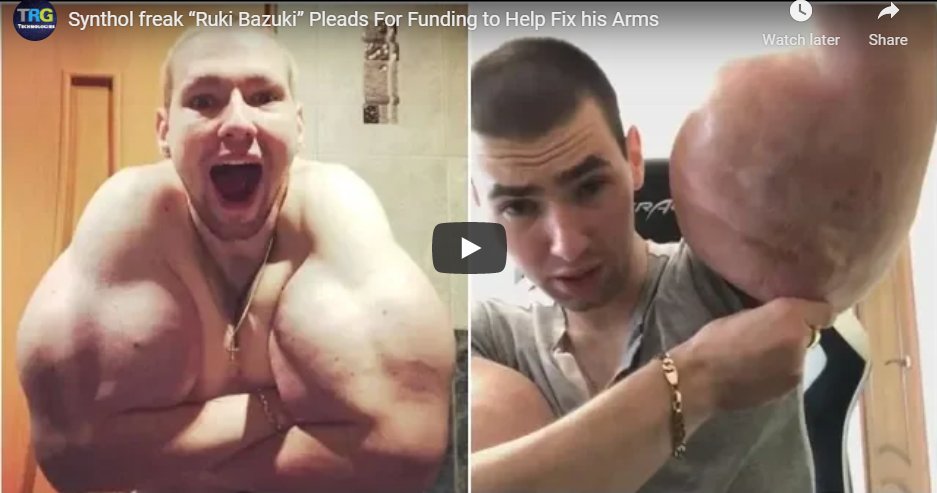 So, before anything, let me address the likely question many of you find yourselves asking, “who the hell is Ruki Bazuki?” I’ll be honest with you, I didn’t know, either, but I certainly know who he is based on the many photos and videos I’ve seen online. I’m sure you do, too. Is he a champion bodybuilder? Has he broken strength records? Who is he? Has he been on major motion pictures? Why is it that I can recognize him, and you probably can, too?

Ruki’s main claim to fame is that he was one of the most talked about synthol freaks of the last couple of years. There have been a handful of these buffoons who have managed to get on social media, develop massive followings, and scored a ton of media appearances – usually on outlets outside the fitness industry. I hate to insult people in an article, but if the shoe fits… Guys like Ruki, have little to no regard for their own lives, but they have a direct influence on countless people, particularly the youth, who are looking for fanfare – almost at any cost. It’s not like people long ago didn’t want to be famous. After all, that’s why they call the Sunset Strip, the boulevard of broken dreams. Countless young people and struggling artists moved out West, in hopes of striking it big, but social media is different. You don’t have to go anywhere, you just have to do something that makes your video go viral, whether it’s for something good or bad, it doesn’t matter. If someone has a video that’s getting millions of views on Worldstar, that can create a following out of thin air. Sometimes, most times, people like Ruki don’t land any sponsorships. What company would want to be known for supplements that make someone look like him? It’s also unlikely that media outlets would pay him – they see press as their payment – and guys like Ruki are probably fine with that. In the end, all they truly want, is to be noticed.

The good news for this Russian synthol sensation, is that he was one of the lucky ones. While steroids have never directly killed anyone – that I’m aware of – these site enhancing concoctions have. Let’s also be clear here; when various news outlets call Ruki “a synthol kid,” they’re actually stretching the truth.

Synthol is a name given to any number of SEO’s that are used by competitive, physique-based athletes, in moderation, to visually bring up lagging bodyparts. If a great champion is falling short of winning, they will usually do whatever it takes to win. If they’ve done all they can do, with the genetics they have, including rigorous training, strategic meals plans, and various massage therapies (and the like), they can either resign themselves to the cards they’re drawn – or – take more decisive measures. Take calves or traps, for example. You can train either till the cows come home, but sometimes the body, simply, won’t respond. If injecting an SEO, just for the contest, can be done so without looking obvious or silly, many will go that route. Some guys (and gals) are so good at it, that even the most keen eye can’t spot it. To lump Ruki in with top tier athletes who use SEO’s for a single contest or for a photoshoot, is a huge mischaracterization. People who abuse homebrew SEO’s don’t compete – hell, many don’t even look like they train. After all, there were guys from just a few years ago, who had 25” arms, with popsicle stick forearms. They looked utterly ridiculous and were immediately used as cannon fodder by huge social media channels, like those of Nick Strength & Power, as well as former greats like Luimarco. Some of Lui’s biggest videos were all about him poking fun at guys who had balloon arms.

So why are more and more guys from all over the world doing this to themselves? Many have died and some who haven’t, have had to deal with amputations, horrible infections, and months-long hospital stays. If you’re talking about people who inject unknown substances, multiple times a day, everyday into their arms, do you really think they always sterilize their syringes or have routine doctor visits? For many of these freaks, their one and only time in front of a doctor is when they’re on the verge of losing limbs or being put in a bag. That may sound harsh, but that’s their reality.

I used to think that the people who subscribed to this path to stardom hailed from indigent regions of the world. Maybe this was their one and only way to provide for their families, but that’s mainly wishy washy bullshit. I found myself trying to write an alternate narrative, attributing some kind of noble pursuit these clowns embark on, but there isn’t one. They’re not starving or trying to make ends meet, rather, they’re just vain people who don’t want to put the work in, who don’t want to sacrifice, but who want to be superstars. It doesn’t matter if they’re the butt of jokes or the inspiration that gets people to the gym. They are the kings of there not being such a thing as bad publicity. Hell, you know Ruki probably Googles himself on a daily basis, and will more than likely read this article. After all, if i could show you the numbers Iron Magazine gets each month, I could all but guarantee he’ll read it and so will a big number of his contemporaries. And as sure as I’m 6’4 and bald, I can pretty much guarantee that while Ruki was lucky enough to get his arms drained, without losing limbs, that living a normal life is the farthwst thing from his mind. I bet you there’s a part of him that wants to inject again. Once you taste fame, no matter how you get it, it can be very difficult to walk away.

What is fame, after all? This is where I hope my words can reach this young man and hopefully make some kind of impression. In the grand scheme of things, fame means little. The people who double-tap, who leave comments, and/or who follow you, mean nothing. To them, you’re just an anomaly, a walking scientific experiment. If you die, they’ll find someone else to follow. They are not real friends. You’d think this stuff was just common sense, but fame can really mess with someone’s outlook. It can and has changed people, sometimes costing them their lives. This is why there’s guys whose lived literally depend on a single dialysis treatment who continue to run cycles, continue to train like beasts, and may give up their time on this planet for a $5 trophy that’ll eventually get buried in their closets, peeling away and collecting dust. It makes little sense, but fame (for some) can be the most addicting drug of all. They’ll do whatever it takes to get it – and – to keep it.

But don’t just take my word for it. Look up some of the old school synthol freaks, guys like Klaus Doring, Moustafa Ismail, Rodrigo Ferraz or any number of the others. Do any of these names even, faintly, ring a bell? If they don’t, Google them. I’m sure once you see them, you’ll say “oh yeah, that guy!” The question is, where are they now? How badly did they ruin their lives for social media clout? It’s simply not worth it. It’s also NOT bodybuilding. That’s why these guys get zero press with fitness publications. They’re outed from first sight.

Anyways, I could go on and on, but to those who are contemplating fame at all costs or who have already started destroying their bodies for stardom, trying to reason with them, is almost akin to talking into a dead phone. If you, however, are learning about this phenomenon for the first time, all I can say is, there’s nothing cool about what these guys do. And while we often use the term freak in bodybuilding; we use it as a term of endearment. When we refer to synthol-abusers as freaks, there’s nothing kindhearted about it. We don’t hate them, but we hate what they’ve done to themselves. We also hate the very real possibility that people outside of the sport would think that’s what physique-based sports are all about. Nothing could be farther from the truth.

What’s your take on Ruki draining his arms? Do you think others will follow his lead and that synthol abuse will, one day, be a thing of the past?