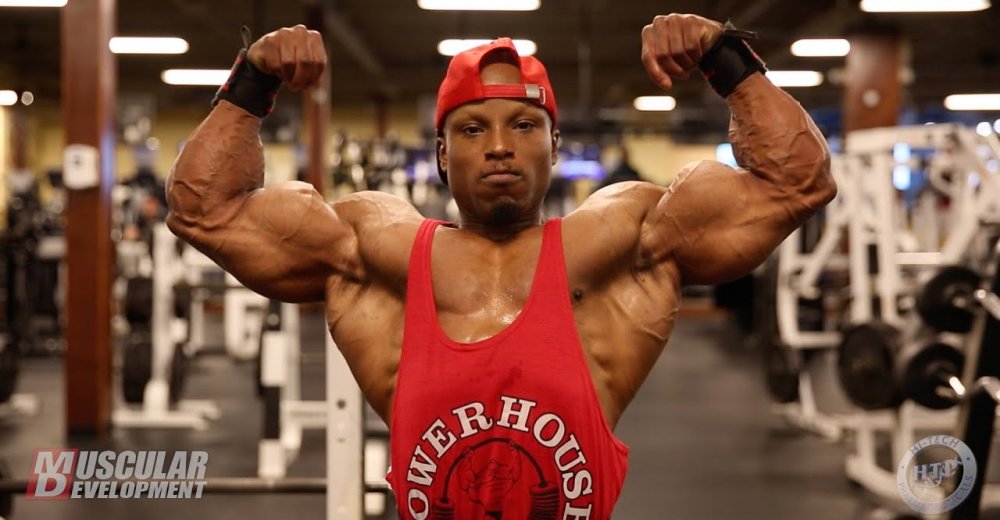 There aren’t a lot of surprises in the fitness industry; however, when 212 Mr. Olympia Shaun “The Giant Killer” Clarida announced he’d do the 2021 Legion Sports Fest this coming in weekend, it sent shockwaves throughout the industry, especially because the champ would be competing in the Open Division. Although he’s not leaving the 212 Division, this announcement is significant for a number of reasons. For starters, Clarida is one of the most blue collar bodybuilders there is and after hearing his fans rave and rave about how he should throw his hat into the Open, he figured why not?

I mean who does that? It’s spur of the moment, it’s totally unscripted and it’s like music to the fans’ and media’s ears. This is also big news, as Big Ramy (apparently) just won his second Sandow and the sport is in a period where mass seems to be in charge. Remember, Clarida is now “playing with the big boys,” but that may not necessarily be disadvantageous for him. Many of the so called ‘big boys,” lack the extreme level of condition Clarida is used to in the 212. I mean, not to beat a dead horse, but Ramy was able to win his second title while being bloated in the prejudging; Labrada scored Top 4 while melting throughout the mandatories. If Clarida comes ultra shredded, even if he’s giving up 40, 50, or even 60 pounds, he may very well keep true to his name and slay quite a few giants. Also, this is a former Mr. Olympia, not some random 212’er looking to wet his feet. That, too, will get him closer looks from the judges.

Can I prove that? No. Do I believe it? Wholeheartedly. That’s not to say he’s going to be given anything, but he will get his time in the spotlight – that’s for sure!

I’d say this is contest is just for fun, but what if Clarida wins? I think that’s a very real possibility. He says he’s not leaving the 212, but what happens if he suddenly lands an Open Mr. O qualification. What then? While guys like the late George Petersen and reigning 212 Mr. O Derek Lunsford were long urged by fans and critics to go open, I don’t know that Clarida has heard it much. Of course, he’s heard it from fans and haters to do so, but that’s mainly to see how he’d do and that’s exactly what’s afoot.

Interestingly, GK isn’t the only 212 Olympian to go open at the big show in Reno, NV. The Mutant, Tonio Burton who placed 10th in Orlando, after a big year that included him winning the 2021 Indy Pro, will also be in the mix. The difference between Burton and Clarida, is that Tonio is looking to leave the 212 and make a new home for himself with in Open Bodybuilding. I had the privilege of interviewing him last week on @StrengthAddicts IG LIVE and he was amped up about doing the contest. Burton is also a native of the biggest little city on Earth. In what may seem to be just a couple guys trying something new, could easily turn into a 212 takeover.

For years, the fans and media have debated how 212 guys would do in open competition. Take one look at Hadi Choopan. The former 212’er has become one of the strongest candidates to win the Mr. Olympia. Once he competed in Open and saw how competitive he could be, he left his former division for gone. Another, even bigger star, would be William “The Conqueror” Bonac, who also started out in The 212. Not only has he won two Arnold Classics, beating Big Ramy in 2020, but he’s placed as high as runner-up at the Mr. Olympia.

Now I know what a lot of my detractors will say; they’ll say that Shaun is considerably shorter and lighter than either Choopan and Bonac, but bodybuilding is about height or weight. The illusion trumps the numbers on the scale. Look back to the days of Lee Labrada. The only guy he couldn’t beat was Haney, but he beat everyone else. In fact, if you put Lee next to guys 50lbs heavier than him (and taller), he’d bury them. It didn’t matter if you were at the judges table, watching the VHS, or 50 rows back, aesthetics and condition, will always impress the hell out of bodybuilding fans. Another big name that was always pushed to go open was 7x 212 Mr. Olympia James “Flex” Lewis. No one in their right mind would write off Lewis, Choopan, or Bonac, so maybe no one should write off GK, either.

Shaun can say this is just for fun all he wants, but anyone who knows what he’s all about, knows that the other part of his statement is key. When Shaun says the timing is right, it means he’s maintained his condition. If he brings anything close to what he brought to the Showdown, I’d say he’s hard to beat. I also think that everyone on the stage will be looking at him as their chief competition. I can assure you that none of the Open guys are overlooking the New Jersey native. Any who do, would be fools. I suspect that if the champ comes in with razor sharp condition, the judges’ eyes will go to him, almost immediately.

And while the height differential may hurt Clarida, initially, he knows how to use it to his advantage. His years of posing expertise, will allow him to showcase the strongest parts of his physique, making it cumbersome for his taller competitors to pose adequately next to him.

Whie it might seem comical to see a short guy pose next to a giant, if the shorter guy is on point, firing on all cyclinders, how does the tall guy counter the compactness and the mega-dense look of the shorter competitor? He can’t, save for doing most musculars on his knees – he just can’t. Laugh all you want, but bodybuilding is a short man’s sport. Once you get past the height difference and you look at each physique individually and then mentally compare them, the short guy always has a huge edge. Granted Shaun is shorter than the short end, but if I was a bodybuilder and I had to pick between being really short – or – being really tall, I’d go with really short every single time.

When it comes to the entertainment value, Shaun will wow the audience unlike any other. The mere fact he’s doing the Open class, has already created a substantial amount of buzz in the Legion Sports event. While promo has been top notch throughout the year, this announcement has given it a huge push just four days out. There’s no amount of PR or marketing that could have paralleled it. Moreover, the speed at which the news has spread, could only be achieved organically. While the press has been quick to break the story, I have already been texted and DM’ed about a dozen times from friends in the industry asking me what I thought about the news. That’s absolutely insane!! It’s a jackpot for the contest, it’s great for everyone doing the show, and it’s great for the fans. I haven’t wished I could be in Reno more, than now.

What do you think about Shaun’s big news? How do you think he’ll do? I, for one, would not be the least bit surprised if Clarida wins the show. I would bet the hair that’s not on my head, that Shaun will beat a lot of guys and he’ll be all smiles wherever he lands. That’s not to say he’s not going in with 110%, but the 212 mentality is wholly different than the open. These guys aren’t petty, they all get along, and while they all battle hard, they love being on stage. That’s a big edge as well. It’s going to be a great show!! Best of luck to the Giant Killer (even though he doesn’t need it).