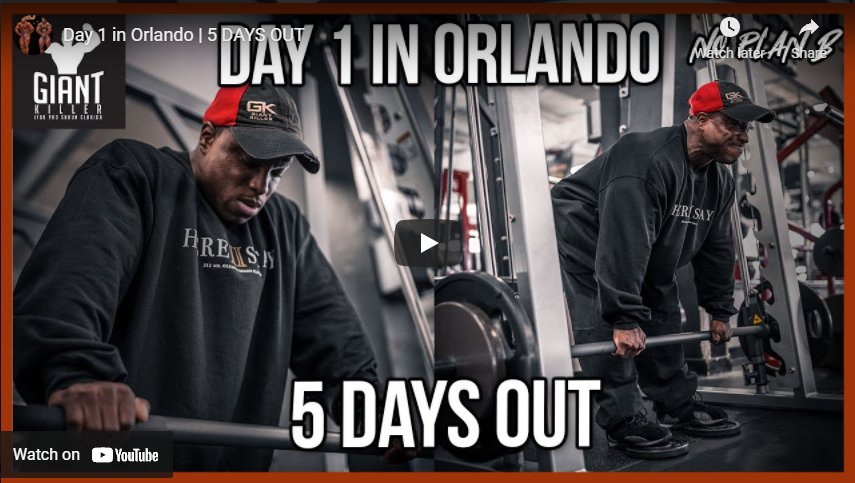 I’m very proud of Shaun Clarida. Last year, I was the only media personality that predicted the Giant Killer would win the 212 Olympia Showdown. Back then, everyone was getting more love; you had the front runner, The Lion of Lebanon, Kamal Elgarni, the defending champion, backed by powerhouse BPI Sports. You had George Petersen, Derek Lunsford, and a shortlist of other extremely dangerous bodybuilders, which also included veterans of the stage like Ashkanani, Henry, and others. The mere suggestion of Shaun Clarida, was simply not taken seriously. It wasn’t that Shaun wasn’t a hard worker or that he wasn’t respected by his peers. I think people respected the hell out of him, but they had put him in a box. For many people, Clarida could have been a champion if he were taller, if he weighed more, and/or if he competed at smaller contests with smaller guys.

The fact is, Clarida didn’t dramatically change his look. He didn’t try to gain a ton of size and he also didn’t try to beat any other, single, competitor by mirroring their look. He simply kept following his own path and things came together for him on stage. The more he posed, the harder he got, and the more his self confidence grew. After all, Kamal looked better in 2020 than he did in 2019, when he won the title. A lot of people, maybe just as many people as thought Shaun won, thought Kamal did. There were these two guys, and then there was everybody else. What separated the Lion of Libya and the Giant Killer was a hair, but Clarida got the win; he deserved it. So now, the big question is, will it be another Kamal/Clarida contest – or – has The 212 gone in a different direction? Also, let’s talk about growing the sport and promoting the division, which guy did a better job, and why?

Much like with Ramy and Curry, The 212 will have two Olympia champions on its stage this year. Technically, it would have had three if David Henry competed, but from what I hear, he’s not doing the show. Also, no disrespect to him, but I don’t think he would have found himself in the Top 3, anyways. And that’s not really directed at his physique or his ability to get in tiptop shape, it’s more so due to his past placings. I think the judges may be harder on former champions, only because they may subconsciously expect more out of them. I really don’t know; all I know is, David has taken tough placings over the course of the last 4-5 years. Some of these decisions have literally left me scratching my head in confusion. In any event, David isn’t doing the contest, so the 212 stage will have but two Olympia champions. By default, I think that puts Kamal in the Top 6 for sure.

Aside from the respect shown to a past champion, I think Elgargni will bring his best, and command a spot in the 2-3 range, based just on that, alone. The big question for me is, what does Derek Lunsford bring? After working with Hany Rambod and, seemingly, far more focused than he has been in many years, I could see Derek being the last man standing next to Clarida. I’m also curious to see what Petersen will bring. This is a guy who’s no stranger to top honors and he’s a fan favorite that a lot of people would like to see in the winner’s circle.

Beyond the big names, though, we have new champions in Tonio Burton and Nathan Epler – two guys who easily find themselves battling for the top spots. Tonio, in particular, has a lot of similarities with Clarida, because not only didn’t he get much love from the media, most people didn’t even know he competed in The 212. Before his big win at Dave Bower’s Indianapolis Pro, Tonio Burton was basically a no-name in the sport. I know that sounds harsh, but I think Burton would agree. That being said, he made people know who he is, he forced himself onto the conversation, with a huge win that solidified his position as a top contender.

Unlike other champions, Shaun hasn’t forgotten where he came from. Not so long ago, he, too, was totally under the radar, but he knows that all that can change for a competitor with one contest. For as much as I’m sure Clarida is looking at the big names, I’m sure he’s also studying the dark horses. No one is going to sneak onto that stage in Orlando, FL, flying under Shaun’s radar – it’s just not going to happen. Having that attention to detail is going to definitely help him retain his title. Moreover, his work with legendary contest prep coach, Matt Jansen, has undoubtedly been an integral part of Clarida’s success. These two guys have a fantastic working relationship. The athlete trusts in the coach and the coach knows his athlete’s body. They already have one title to their name and it’s likely they’ll have at least another two or three. That’s right, folks, I believe we may see a pretty good run for the New Jersey native as the top champion in the 212 Bodybuilding Division.

I also think that Shaun has been a very active, very good champion. While we often hear that the Mr. Olympia is the ambassador of bodybuilding to the world, we’ve seen champions that really don’t do very much with their fame. Kamal was a good champion, building important support bases in north Africa, Britain, and to a certain extent the States; however, Shaun has really pushed the envelope. Clarida has been pounding the pavement, going to multiple in-stores, seminars, and other events (though he lost his main sponsor AFTER winning the title). He, clearly, likes being around people and he likes to interact with the fans.

Although I wasn’t able to get an interview with him after Orlando, I understand he’s very busy, and I’m grateful for the interview in 2020 immediately after he won. I continue to be a strong supporter of his and I know, deep in my heart, that what will ultimately decide the outcome of the 212 Olympia Showdown, is heart.

Unlike the Open, which has some dead weight (yes, even at the Olympia level), the 212 is ultra competitive. This division has never had an issue with guys coming in soft, doing half-ass poses, or with distended midsections. Everyone comes in ripped, everyone poses hard, and the vast majority of these guys know how to work the room. The fans love seeing these guys battle and for these reasons, it’s a mystery to me why the 212 was removed from the Arnold Classic. Then again, not all decisions make sense. Sometimes, it’s pointless to try to make sense out of nonsensical matters.

In any event, heart is what’s going to determine who wins the title in 2021. Much more so than in the open, heart is what’s going to help the champion emerge from the pack. And like in the Open, I don’t think anyone on the 212 stage is to the point of being invincible. I don’t think anyone up there can lay claim to the dominance enjoyed by 7x 212 Mr. Olympia James “Flex” Lewis during his reign. Like I said, everyone will be good, and the Top 5 will be great. HEART is what will determine the winner, and no guy up there has as much heart, as Shaun Clarida!!

I hope you’re all getting ready for an all out war! Because that’s what you’re going to see at the 2021 212 Olympia Showdown!