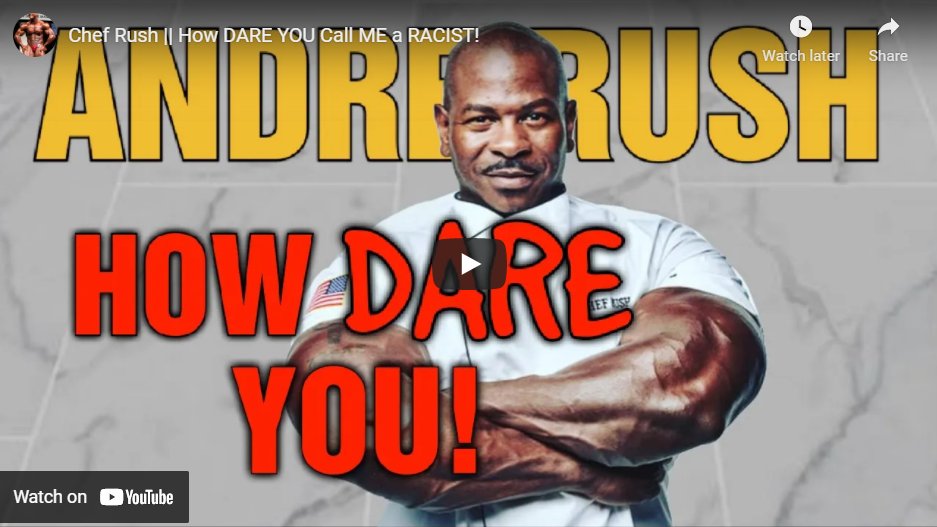 It seems an all out war has erupted between two of the fitness industry’s most talked about fitness celebrities. As is often the case, much of the discussion in bodybuilding centers around nutrition, training, and supplementation. How much do people actually eat, how much do they lift, and are they natural or not. These discussions have been causing rifts from the beginning of time, online. For years, we saw people up in arms on the message boards.

I know, because I was often embroiled in online battles. Bodybuilding fans love to argue; we’ll argue over which champions we like most, we’ll debate placings that are long in the past, and sometimes we’ll just argue for arguments’ sake. In the most recent skirmish to rock the fitness world, it seems legendary Canadian bodybuilder and contest prep guru Gregg Doucette locked horns with Chef Rush, the world famous Whitehouse Chef. Both of these guys are larger than life, they get mobbed at expos, and countless people always hit them up for high-fives, photos, and autographs. It’s gotta be tough being this gifted, but it’s a cross they carry, because someone’s gotta do it, right? Anyways, as is often the case, the feuds tend to either tone down naturally – or – they get really heated, really fast. That being said, there’s heated and then there’s bigotry. While we can certainly understand grown men getting upset and quickly resorting to name-calling and other instances of aggressive behavior over the interwebs, there is simply no excuse for bigotry of any sort. There is no place for racism in our sport, a point that Dave Palumbo and his crew made from the airwaves of RXMuscle. But wait minute, how did we go from Coach Greg and Chef Rush to Palumbo? Do I even need to expound?

Before delving into why Dave found it necessary to weigh in, I should say many other channels did as well. This is what happens on social media in bodybuilding, particularly in the months before and after the contest season. There isn’t much going and people are bored. They want something to talk about – even if it’s total crap. And I have to say, even though the topic of racism has sprung up, this news story has little, to no journalistic value. The reason is simple, Coach Gregg has unequivocally denied making any racist comments, he denies being racist, and being as big of a public person as he is, he has a vast body of work that includes the written word, podcasts, and videos. There is absolutely nothing to suggest he’s a bigot; however, that hasn’t stopped his detractors. Coach Gregg did show some off color comments made by Chef Rush in response to haters on his videos, but that is also taken out of context. I have zero sympathy for haters and I get that Gregg was simply trying to give it back to the Chef, but his arguments don’t pass muster, either. The truth is, if a keyboard warrior is going to post trash comments on videos and/or other content you’ve worked hard on, then they get zero consideration. You can call them out, erase their comments, and/or block them.

When it comes to erasing comments, Coach Gregg took great offense at the accusation that he erases comments. While I can understand that that would be against his against-the-grain approach to fitness, we don’t know for sure whether he did or didn’t. Doucette claims YouTube erases comments on its own. I don’t know if that’s true, but I do know – from personal experience – that the platform removes entire videos, seemingly for no reason. As many of you know, I run StrengthAddicts and over the years I’ve covered dozens of contests. I have entire shows (sometimes as many as two dozen videos per contest) that have totally vanished. There’s no email, there’s no violation report, it’s like they never existed. The only thing is, I know they existed because I poured my heart and soul into them, I was the guy holding the microphone, I was the guy coming up with the questions, and I was the guy who produced the videos on PowerDirector. In fact, I even have backup files of every interview I’ve ever done. When I look up the videos in question, they’re just not there. That’s not supposed to happen, but it did, so could YouTube be erasing comments? Absolutely.

Gregg also took exception with the fact that Chef Rush allegedly sent him a scathing DM, but erased it before Gregg could screenshot it. That’s sour grapes because Gregg probably wanted the screenshot to make a video and blast his adversary. The fact he wasn’t quick enough, is just par for the course in the social media game. Then again, anything you put out on the web, will always be there, whether you unsend it or not. The fact is Chef Rush didn’t strike first blood. Greg’s M.O. is to go after people; he likes to point out who’s natty and who’s not, he likes to call into question people’s positions on nutrition, training, and sometimes even their whole journey. He doesn’t do it to be negative, but he does it for hits. While he doesn’t make his living directly off of YouTube, it certainly has been a huge feather in his cap. The guy happens to be a great coach and has many happy, successful clients. The videos and the clout they generate, keep his name on many peoples’ lips, and in turn that gets him clients.

I don’t care what era we’re in, word of mouth trumps all other types of advertising – from banner ads, to popups, to emails. If you’re being talked about in an industry as vain as ours, you’ll be set. In bodybuilding, there really isn’t such a thing as bad publicity, either. It’s almost down to a science, with very few glaring exceptions. Racism, as I stated earlier however, is totally unacceptable, but in much stronger cases than this one (e.g. the leaked Rich Piana videos), the stars in question have managed to get themselves back into peoples good graces. We see the same thing in mainstream society (e.g. the leaked Dog The Bounty Hunter audio). The reason why guys like Piana or Chapman were able to redeem themselves was because they weren’t really racists, but in Doucette’s case, he denies ever making any statements and unless Chef Rush can prove otherwise, it’s really just his word against Doucette’s.

Evidence is key. It’s also something Dave Palumbo, often, lacks in his reporting. I’ve seen Dave break stores faster than anyone else, only to have to make pathetic retractions soon thereafter. Will he retract himself or his reporting on this story? Probably. Will he do it in one video? Probably not; he’ll probably make a series out of it, then follow that up with a couple Iron Debates, a radio show, and maybe an article. After all, Dave wants traffic. Everyone in this business wants to be talked about. Sad, isn’t it?

What’s your take on the feud between Coach Gregg and Chef Rush? Should Palumbo and others be chiming in, creating content, and creating more tension?