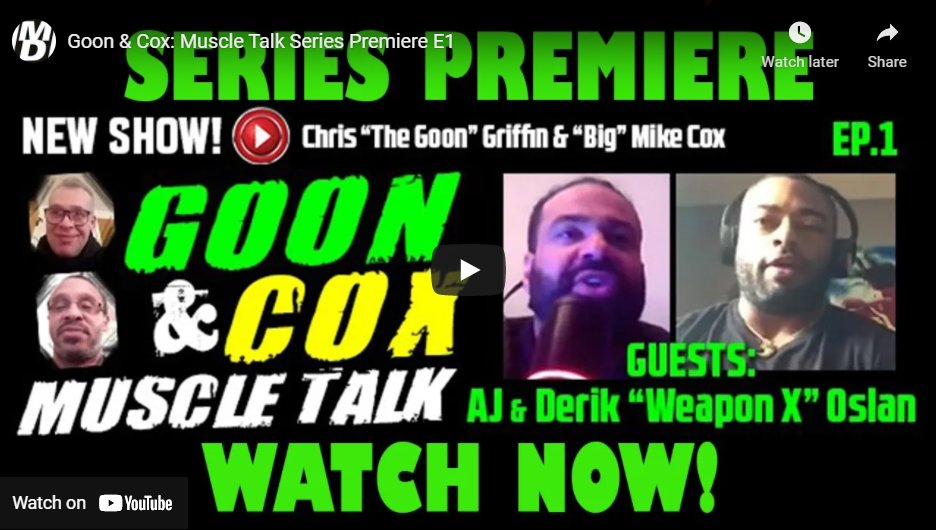 You just can’t keep a good man down – much less two!! I’m so happy to announce the return of Chris “The Goon” Griffin and “Big” Mike Cox to online television. If these names sound familiar, it’s with good reason, as they were the hosts of the IronMag TV series Beast Coast Live!! The show evolved from Griffin’s original series Down And Dirty with The Goon. When D&D went on hiatus, The Goon recruited BMC, and from there they put out a string of shows that featured guests ranging from old school legends to current Olympia champions. Following IronMag TV, BCL went independent, doing another impressive run of episodes, before ultimately going on hiatus. Since then, the two have remained a fixture at the Muscular Development [message] boards, as well as participating in various projects.

I have to give huge kudos to my buddy Steve Blechman, the iron visionary who not only has defied the tendency to bury print media, but who has found a way to bundle advertising, offering companies the best of both worlds. They get print and digital, maximizing their advertising efforts, and putting their products in front of millions. Also, ever since Ron Harris, Online Editor in Chief, took over, he’s outdone all his predecessors. The website fires on all cylinders and enjoys a lion’s share of the hits, burying rivals – old and new. There’s no question that Muscle Talk has the full support of MD’s two top guys. The fact is, now more than ever, a show like this could be exactly what the fans want. I believe Goon and BMC share a wealth of knowledge and a common passion in what they’re covering. That’s absolutely key.

Both guys live in focal points when it comes to physique-based sports. Chris hails from Boston, a stronghold of the NPC Northeast, run by Big Steve Weinberger. So many huge names have emerged from this region, including Mighty Mike Quinn, Mike Matarazzo, Paul Demayo, The Boston Mass Jose Raymond and 4x Mr. Olympia Cutler. The Northeast is also a key region of support for Muscular Development – the lone remaining 100% bodybuilding publication. People there are blue collar, hard working, and go to the gym with a mission. They’re not there to play on their phones, chitchat aimlessly, or hog machines while others wait to lift. It’s quite possibly one of the last hardcore enclaves where muscleheads feel totally at home. Similarly, Mike hails from the Tampa Bay region. This has become another hotbed of bodybuilding and fitness. It’s become the home away from home for huge contests, like the NY Pro, during the most chaotic moments of the pandemic. The gym scene in this part of South Florida is also very much like that of the northeast. It’s not uncommon to still find a number of hardcore facilities that not only allow bodybuilders, but welcome them with open arms. I think the hardcore culture both of these guys come from, makes a big difference.

In today’s fitness scene, a lot of journalists and content creators, simply copy each other. For example, let’s take Nick Strength and Power. We always take Nick (it’s not that we don’t like you, my man) it’s because he’s the most popular Youtuber. Generally, Nick doesn’t cover shows, he doesn’t normally interview people, and I don’t know what kind of hardcore bodybuilding scene there is in the Cincinnati area, but with all due respect to the fine folks in Hamilton County, it ain’t Tampa and it sure as hell ain’t Boston. And yes, I used the word ain’t – sue me!

So what does Nick, actually, do then? Well, he copies and pastes stories, then he talks over them. That’s basically the gist of his whole approach. That’s the gist of many of the wannabes that want to be where Miller is today. That being said, you don’t have to be a bodybuilder to be a great bodybuilding journalist, but if you’re also not interviewing the athletes and you’re not injecting yourself into that scene, then the content you’re putting out is subpar. And maybe subpar content is what’s hot now, but that content will not stand the test of time. It might get big hits today, but in 5-10 years, no one is going to remember this stuff, much less want to watch it. On the flipside, I challenge you to click on any episode of BCL, from 2017 or 2018, in 2021, and you’ll be glued to it.

As former/current competitors Cox and Griffin bring that dynamic to the table as well. They’ve dieted and they’ve suffered. They’re also coaches and they know how to dial people in. This is why their content should also draw supplement company interest. When Goon used to do D&D, he’d take the products he discussed for that week and he’d do an in depth analysis. He would talk about the thermogenic properties, the pump, as well as any up and downs. His reviews were honest and they were laid out in such a way that muscleheads understood.

One of the best critiques that legendary bodybuilding star Greg Valentino often made about Jerry Brainum, was that he often discussed matters dealing with training, nutrition, and supplementation, in overly sophisticated, scientific terms. It’s not to say that bodybuilding enthusiasts are stupid – not by any stretch – but why overcomplicate things? Why not say what you have to say, simply, and get to the point? This is something that both Goon and Cox do, almost naturally. They could sound like professors, if they wanted to, but they’d rather get the information out there, and move to the next topic.

For as much information as the internet offers, there’s also a sea of misinformation. There are countless websites, dressed to the nines, with all the bells and whistles imaginable, but most of their content is bunk. Most of their statements aren’t backed by science, studies, or even by everyday lifters. It’s just hot air. Today, more than ever, athletes want to tune into programs where the hosts know what they’re talking about. Imagine tuning into Nick Strength And Power for information on gear, reverse dieting, or growing stubborn muscles. I mean, what does he know? All he does is repeat recycled content – again – no disrespect, but it is what it is.

Maybe I’m old and I just don’t get it, but I can tell you that my generation appreciates media that can tell it like it is. It’s one thing to parrot news, but it’s another to break down physiques, truly handicap shows (as opposed to merely guessing or picking winners based on the number of followers they have or their sponsors), and even amplifying the will of the fans. Do the fans want Wellness? Do the fans want The 212 to return to The Arnold? Did the judges score a contest in such a way that leaves people scratching their heads? These are questions that real journalists would ask, and questions that only real journalists would answer – and not off the record, but on the air!!

When it comes to Griffin and Cox, you also have to realize that both of these guys are regulars on the MD Boards. Everything they say is up for debate – that’s the nature of the beast – and if you’re not ready to defend your points, in that type of forum, you’ll get eaten alive in the media. These guys know how to deal with trolls, they know how to keep haters at bay, but they also know how to treat the fans.

Back in the BCL days, both hosts took pride in knowing their regulars by name, knowing things about them, and welcoming them as they arrived. And that’s another big factor to take into consideration. These guys weren’t in some garage talking into a webcam; they were both in a live setting, talking to live guests, and reading/answering live comments. There aren’t any redos in that setting. Once you say something or post something online, there’s no erasing it. Someone, almost always, either got a screen shot or a screen recording. These guys are total, all around pro’s when it comes to online television and I have no doubt they’re going to bring a great edge to an already robust roster at MD. Like Steve always says, “it’s all happening at MD!”

I hope you’ll check out this great program. If you do, I’m sure you’ll watch it religiously!