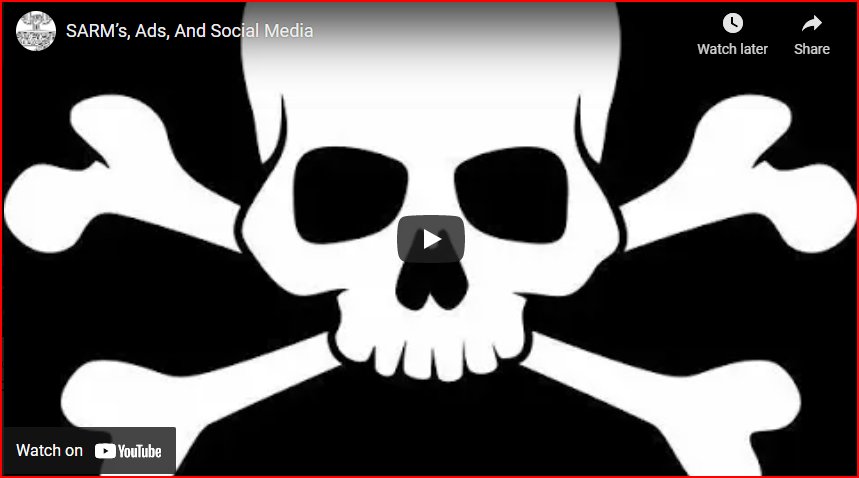 It seems that every day I’m confronted with a new ad, from a new company, selling SARM’s as dietary supplements on Instagram. That’s right folks, not some off the grid app, not some random website, but the most popular social media platform on the planet, owned by the biggest and baddest of them all – Facebook.

Surely the ads must be presented in such a way that gets past the censors. I mean, what other explanation could there be? You have companies that are blatantly breaking the law. And that is the case. I know that many of you are dying to comment and take The Ole Iron Duque to task. I know that a great many in the fitness industry truly believe that the “Not for Human Consumption” disclaimer makes these products legal. It doesn’t.

I know that many of you think that if the products are sold “for research purposes only,” that that somehow legitimizes them. It doesn’t.

Folks, the U.S. federal government isn’t stupid. They don’t believe that a bunch of lunkheads suddenly decided to make a career change and wanted to study the intricacies of novel compounds with regards to muscle growth, training recovery, and/or rapid fat loss. They don’t believe makeshift labs have been assembled. They know what’s going and the only reason they haven’t acted faster, is because everything they do is prioritized. Although they may not be ready to move on certain cases, now, that doesn’t mean there aren’t processes taking place to eventually get to that point. If anything, active cases are being built as we speak. The alphabet agencies are not going to request a search warrant and/or make arrests unless there’s a strong case behind it. They’re not going to waste their time. Just a few weeks ago, one of the biggest SARM’s sites, Rats Army, was raided, and I’m sure countless of these companies have received FDA warning letters.

Most people would stop dead in their tracks if they had the good fortune of getting an FDA letter. Most of the company owners I know, take them very seriously – as they should. They also open their doors to agents and are 100% complaint – that’s the way to go; however, there are companies that receive these generous warnings and ignore them. It’s business as usual. And this could be attributed, largely, if not exclusively, to the fact they want to make as much money as possible, no matter the consequences. Even if the products they’re bringing to market aren’t safe, they don’t care.

What consumers need to understand, is that a great many business owners in the fitness industry, simply, don’t care. They appreciate your business because you’re making them rich, but they don’t feel they owe you anything. They don’t care if you get sick and they may not even care if you die. It’s just money to them.

Consumers need to wise up. Many of the SARM sites use stock models. These people haven’t the faintest idea about the companies, let alone the products, their names and likenesses are being used to promote. These folks aren’t being exploited, though. They’re models and the companies who use their shots, pay them for their services. That as much is on the up and up; however, a great many people bank on the fact that if a jacked bodybuilder or a toned bikini competitor appear in an ad that they endorse it. Unless you see their name and/or them speaking to the point of endorsing, then they’re simply being used for content.

Further to that point, let’s talk about the various “purity tests” and affirmations made throughout many of the SARM sites. These tests are usually not conducted by independent, third parties, and if they are, chances are, the third parties are so random, you’ll never be able to ascertain their credentials. Most of the “purity tests” are bogus, as are the ridiculously-worded testimonials they feature. Many even like to say they have sterilized facilities and pharmaceutical grade products. Again, how does the consumer know? They don’t.

The question is, why? Why do companies that are abiding by the law get rejected, and why are companies blatantly breaking it, benefitting? And it’s a huge benefit. Mind you, I don’t follow these companies, hell, I didn’t even know they existed, but that’s how effective Facebook ads are. They know I love bodybuilding, they know I have a bodybuilding site, and so everyday without fail, I see these ads in my feeds. I know what’s up, but many unsuspecting would-be consumers, simply don’t.

In fact, a great many people assume that anything they see on Facebook or Instagram, must be legit. The same way they feel that businesses they patronize owe them a certain degree of loyalty, they also mistakenly believe that anything that passes social media scrutiny, must then be safe – or at least legal – for them to purchase. The layman’s logic there is that social media applications have so much on the line that they wouldn’t risk losing it all on a blunder. Normally, that might make some sense, but people shouldn’t bank on it. Unfortunately, for whatever reason, Facebook is turning a blind eye and allowing these ads, marketing illegal dietary supplements, to be featured all throughout its feeds

Years ago, when SARM’s legislation was first being discussed, I was convinced that many of these companies would carry on, if and until, raids started taking place. I thought for sure that as soon as arrests were made and cases were litigated, that most of these sites would disappear. I was certain some would linger on in the dark web, limited to members-only list-servs and message boards, but I never thought they’d be all over Facebook ads. It’s insane than three weeks after Rats Army got raided, that every single day, IG is inundated with SARM ads. This takes the cat and mouse game of yesteryear with pro-hormones, to a whole other level.
In any event, who knows what happens next; I just wanted to sound off on what seems to be a chapter from the twilight zone. Who knows, maybe organized crime families will start buying Facebook ads next. I hear their membership numbers are a little low after RICO. LOL.