Another Bodybuilder Blocks The Duque 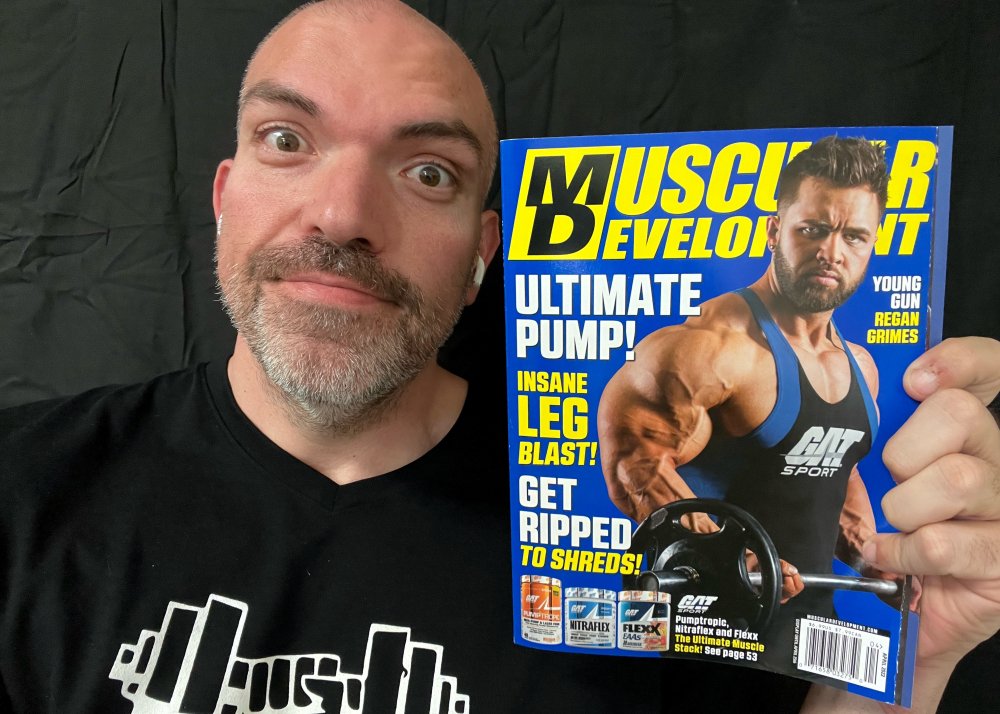 So let me cut to the chase with the premise of this article. It’s not strictly about the fact I bought a Muscular Development Magazine, posted a story on IG, and couldn’t tag Regan Grimes because he blocked me. He joins the likes of Phil Heath and Nick Walker. It’s really a diva-move and probably stems from the fact I wrote a story critical of his lashing out at Oxygen Gym when interviewed by Dennis James some time ago.

I first met Regan at the BPI booth at the 2013 or 2014 Arnold Classic. It wasn’t like I met him for a second or two, I met him because the guy who ran the company is a good friend of mine. We took several photos and talked at length. I also talked to Jay [Cutler] and others. Over the years, I’ve written many pieces celebrating the Canadian pro, but all it took was one critical article and he DM’d me saying it was stupid. I accepted his opinion and left it at that. I didn’t reply in kind or try to make my case. I tagged him because I tagged him in all other articles I wrote about him. Anyways, I never would have thought he would’ve blocked me, but sure enough. It’s interesting that you have 250+lbs bodybuilders, with super testosterone levels, and onion-thin skin. I don’t mean onion-thin in terms of condition, I mean onion-thin in terms of sensitivity. The fact DM’ing me to say my article was stupid wasn’t enough, but that on top of that he had to block me, makes me think he’s very immature. If you’re going to be a Pro Bodybuilder, you have got to be able to take criticism, especially from the media. To date, he hasn’t won any major titles (e.g. NY Pro, Arnold, or Olympia), but should that ever be in the cards for him, I hope he develops thicker skin and becomes less emotional than he currently is. If he can’t, I suspect he’s going to have a rough time. It’s also interesting that he’s on the cover of MD with a GAT shirt, but has Yamamoto on his IG profile. Two companies in one month? That’s interesting in and of itself. But enough about this ultra-sensitive Pro Bodybuilder.

The more prevalent social media becomes, the less day-to-day interactions industry people have, and that includes top bodybuilders. Even Phil, who I’m often hard on, didn’t block me for one article or one commentary. It just so happens that Heath was on a downward spiral as of his third Olympia win. He went from being super chill to more and more uptight. Even after he blocked me, we still had some dialogue on Twitter. Had I apologized for not supporting him, he and I would have been ok. That said, I wasn’t about to apologize for being a fan of other bodybuilders – or – for thinking The Gift was beatable. I’m sure other media figures would have done so, but not me.

Look at Big Ramy. I’ve been highly critical of him. I like him, I’m a fan, and I’ve interviewed him, but when he’s off, I write about it. When he coach hopped, I wrote about it. He hasn’t blocked me and I doubt he ever will. This is why I’ve always said he’s one of the nicest champions in the history of bodybuilding. I can only imagine how someone like Regan or Nick Walker would process criticism in person. Maybe they’d cry or start throwing stuff around. Who the heck knows. The fact they’d block someone on Instagram is so childish, that it’s anyone’s guess how they’d process critiques – even constructive ones – in person.

I remember the one and only time I met Nick Walker in person. He gave me a warning of sorts, “keep it positive.” It caused me to raise an eyebrow and ponder what he was getting at. What he said and the way he said it, left nothing to interpretation.

Look, all these guys read my articles and his statement confirms it. They know who I am and they know what I’m about. I don’t just wake up and decide to be critical of people. They know I’m a fan of Rhoden’s, Curry’s, Clarida’s and others. They know I have shows I like and shows not so much. They know I tell the truth and I don’t hold back, especially now, that I no longer do contest coverage. I used to tread a bit more lightly when I was covering shows around the country. I didn’t want my pen to cause me any issues when requesting media credentials. Now that I’m strictly online-based, I write straight from the heart, with little to no restraint.

I’d never intentionally tear someone down, but there are cases like Regan’s with Oxygen Gym that make no sense and need to be addressed. His interview with Dennis James was utter bullshit. He came off sounding, to me at least, as someone who was forced to live in a hardccore setting, where the entire universe revolved around him. He came off looking and sounding like an ingrate, a hater, and quite honestly, a willing participant in James’ witch hunt of a gym he clearly doesn’t like. Then, when the backlash hit the boiling point, Grimes retracted and tried to put forth an alternate narrative. I think he was expecting everyone to fall in line, to buy his new story, and not question him. When I wrote what I was feeling and tagged him, he called the article stupid, and blocked me. That’s the whole story in a nutshell and quite frankly, it makes me look like a principled journalist and makes him look like a softy. He can pose hard on the cover of a magazine, but he blocks critics on Instagram and can’t be held accountable for his own actions. Maybe he blocked me for raving about the fact that a 177lb freak wiped the floor with him in Reno. Who knows? I honestly don’t know why or when he decided to hit that button, but the fact is, whenever he did it and for whatever reason, it amounts to the same result.

When people ask why bodybuilding isn’t bigger? This is why. Sadly, we don’t have a course pro’s can take and many fail to realize that when they carry on like Karens online, it reflects on the whole sport. Bodybuilders should represent the epitome of strength, resilience, and perseverance. Blocking critics and warning media outlets to essentially just write puff pieces, isn’t a good look. Insecure champions like Heath, who curse out journalists and influencers who suggest other competitors might win, don’t exactly inspire anyone to hit the gym and transform their physiques. I’ll never forget how pathetic watching Phil Heath leave the Orleans, yelling at Luimarco on his phone, throwing the fact he’d won in the YouTuber’s face, was. That sort of pettiness and immaturity led for a great many Gift fans to defect. Who can get behind that sort of nonsense?

There’s two things I’d love to see implemented like yesterday! One would be a promotion clause for anyone who wins the Mr. Olympia and another, would be some kind of a course on dealing with critics for pro’s – not just new pro’s – all pro’s. I think there’s a higher chance we’ll see pigs fly than either of these ideas ever being implemented, but one thing’s for sure, how pro’s treat fans is an important concern. Light shows, nice venues, and elaborate stages help grow bodybuilding, but ultimately, those who have the greatest power to win over the mainstream public, are the pros and champions. If they’re acting like fools, it’ll hinder the sport’s growth and reach.