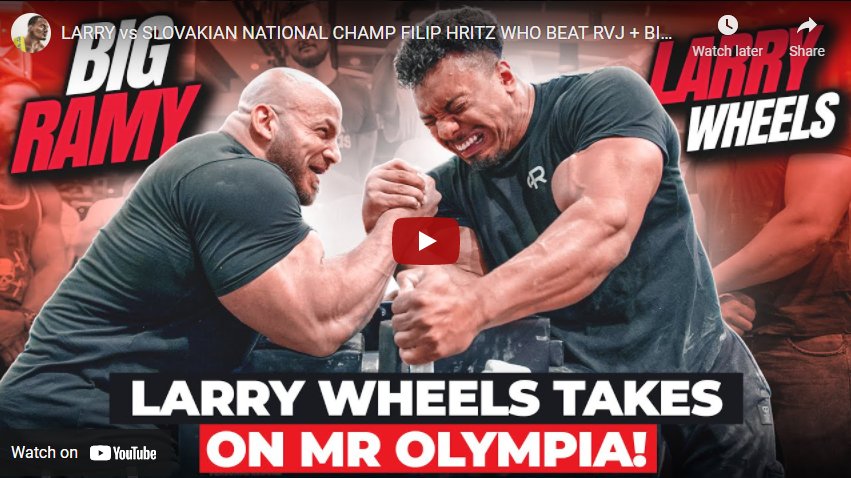 2x Mr. Olympia Big Ramy created shockwaves throughout the fitness industry as footage of an arm wrestling match between him and powerlifting champion Larry Wheels made the rounds throughout the fitness industry. As of Monday night, The Egyptian Phenom took to his social media to let the bodybuilding world know that the match was, in fact, staged. Either way, this story gets more bizarre with time, and it has raised concerns that the reigning champ has done very little to grow the sport of bodybuilding into his second year as its ambassador to the world.

As we all know, Mr. Olympia is the gatekeeper, the shot-caller, the fan’s go-to person for all physique-based sports, the world over. Whomsoever holds this title, is essentially, the most important athlete in the world. And while there are countless divisions, bodybuilding remains the flagship one. We’ve had Mr. O’s like Lee Haney, Jay Cutler, and Brandon Curry, who have gone out of their way to present the sport in the best possible light. From attending expos and seminars to youth athletics and ticker tape parades, these great champions were well aware of just how powerful community service and philanthropy could go, when winning over hearts and minds. Since physique sports remain largely niche disciplines, away from television and the mainstream media, charitable acts can really make up for lost ground. Just one look at these larger-than-life athletes, and everyday people are in awe of them. They want to know how they train, what they eat, and what motivates them to build these incredible works of art.

Bodybuilders who engage the public, grow not only their audiences, but also that of the sport. We live in an age, when everyone is on social media. Everyone has Instagram, Twitter, Facebook and YouTube. Once they meet a pro bodybuilder, especially The Mr. Olympia, they will follow that person on all social media platforms and they will post their photos and videos with said champion all over the net. At that point, their friends and their friends’ friends will weigh in. This series of events brings about a chain reaction that grows all things muscle, unlike anything else. No amount of ad campaigns, pop-up banners, or free giveaways can compare.

Many of us discovered bodybuilding through interactions with bodybuilders at expos and in-store appearances. Others discovered the sport, based on a magazine cover or an interview that really spoke to them. Whatever the case may be, our love of physique-based sports was initiated through some type of interaction, whether active or passive, that led us to discovering the way of life. With that being said, credibility is very important, as is setting the right example. Every champion that I’ve mentioned thus far, presented bodybuilding as a way of improving life through sound eating, smart training, and consistency in the gym and in the kitchen. They could point to a lifestyle they’d led for years.

Thus far, two years into his reign, Big Ramy has done very little to talk about his journey. We don’t know very much about when he got started, how he discovered the sport, and how he believes it can help others. Ramy doesn’t do much in terms of interviews, he doesn’t offer many IG Lives or instances where he talks about his goals, trials and tribulations, or goals for the future.

In a rare instance, when the fans actually get to see him, it’s in what appears to be a reckless show of strength, arm wrestling with one of the strongest men in the world. For the entire weekend, bodybuilding fans and media outlets were sent into a frenzy, worrying that that the best bodybuilder in the world, was jeopardizing his health and well-being by putting himself in harm’s way just to win a pointless match that would do nothing for his run as the greatest bodybuilder in the world. It seems when public opinion turned on the champ, he then went on his social media to inform the world that the match was in fact, staged.

While this may put to rest growing concerns that Ramy was being reckless by putting himself in harm’s way at the height of his career, it creates other concerns, that he’d put so much effort into publishing staged content, when the sport could really benefit from him from pursuing legitimate charitable and philanthropic acts, like previous champions have, to grow the sport. Instead of collaborating with Wheels, Ramy could have coordinated some trips to hospitals, worked with the Make A Wish Foundation, done some IG Live broadcasts or sat for some interviews with Muscular Development, Muscle Insider, or Generation Iron, just to name a few.

I don’t see any artistic value in colluding with social media influencers to release fake content. What’s the end game? Duping fans into freaking out over bogus content? Was the intended purpose to have a good laugh? And if so, now what? I’m not knocking the champ for having a sense of humor, I just don’t understand what he gained from all of this. And how did it help bodybuilding?

Ultimately, the fans are the ones who will have the final word, but as a writer and commentator, I don’t understand the logic behind Ramy’s publicity stunt. Perhaps, you, the loyal readers of Iron Magazine are laughing hysterically or wanting more of this nonsense. I want to see Chad get in Ramy’s ear about doing things that are more in line with what a champion at this level should do. When you stop to think about Ramy’s thought process, as compared to the GOAT, Ronnie Coleman, it leaves much to be desired. Ronnie’s lines have only grown over the years, and whenever he speaks, people listen. Ramy, on the other hand, hasn’t said much of anything and when he is in the media spotlight, it turns out, it’s all a goof.

I have said it before and I’ll say it again, I’m a strong proponent for the promoters of the Olympia Weekend to implement language into the Olympia contract, that winners of each division employ actual promotional work during the tenure of their title at growing the event and the sport. The fact that Ramy won $400,000 for a 2 day event and has done nothing to expand his role in the fitness industry, makes me believe that it’s critical that change be implemented from the organizers of the event. If it were my money, I would want some assurances that the winner of my contest would do what was needed to increase the fan base and increase interest in my event for the following year. When Mr. O, essentially, embarrasses himself, he’s not doing any favors for his profile, nor is he doing any favors for the perception of the title he holds – or – the sport he represents.

That’s just my take, in a nutshell. Do you agree? Do you disagree? Please sound off.