Bodybuilders Need to Think Further Than a Supplement Contract 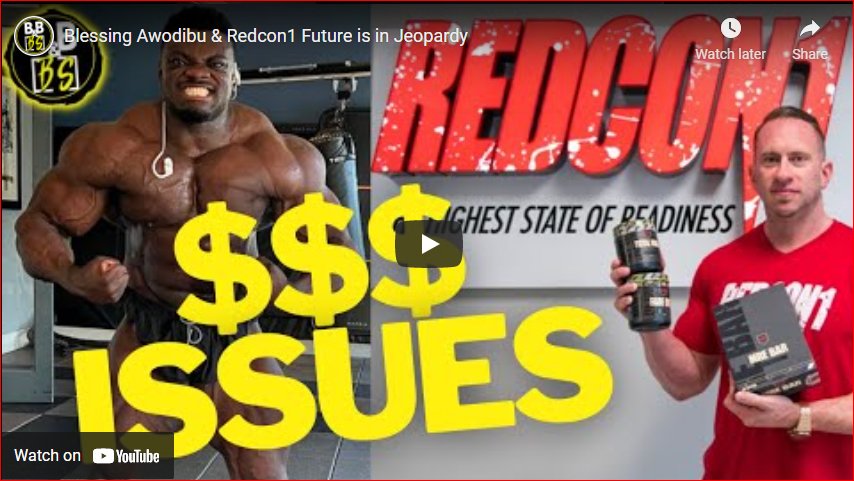 It came out recently that Blessing Awodibu was terminated from his supplement contract with Redcon1 weeks before he was supposed to compete (which he ended up winning the show).

Now, there are so many tangents that we can go off on with this entire situation, but let’s focus primarily on supplement contracts and how they affect bodybuilders.

If you are an IFBB pro bodybuilder, it may seem like you’ve already hit the pinnacle of your career. Then the contracts start coming in from supplement brands. Unfortunately, many bodybuilders sign on the dotted line for a supplement contract and think they can kick it with their feet up and allow that supplement brand to support them.

Sure, that all sounds great… until it isn’t.

In the case of Blessing Awodibu, this guy is coming off of a win and is now without a contract. Will he get another contract fairly quickly? I think so. But I could be wrong.

So, why am I saying bodybuilders need to think further than a supplement contract? Let’s discuss.

You Feel on Top of the World

Blessing was given an opportunity by Redcon1 to come to America and live his dream of becoming a professional bodybuilder — which he did. For starters, Blessing seems like a great guy and could be a solid figure in the IFBB if he plays his cards right. He has a great personality, he’s marketable, and his physique is turning into something that could quickly lead to him being one of the top competitors on any bodybuilding stage.

What’s the issue then, right? Well, when you sign on the dotted line with a supplement contract, many bodybuilders seem to get complacent. Now, I’m not saying that in terms of their training or dedication to the sport, but rather complacent with their finances and worry about where money is coming in from.

When that paycheck keeps getting cashed each month, it’s easy to sit back and think life is gravy and that you’re on top of the world. All you need to do is eat, sleep, and train. Unfortunately, bodybuilders like Blessing found out the hard way that everything can come crashing down in an instant. One phone call is all it takes to wipe away that paycheck you’ve been expecting to come in each month.

The Industry Isn’t What It Used to Be

Back in the day, it wasn’t a big deal to sign a supplement contract for six figures and put your feet up. Supplement brands were signing people left and right. And back then, athletes actually meant something. These days, thanks to social media, anyone with a following can be more of an asset to a supplement brand than an actual athlete who competes regularly.

Look at fitness influencers today. There are people who have never competed a day in their lives who have millions of followers and are making a ton of money without the need for a supplement contract. But if they wanted one, they may get one over an IFBB pro bodybuilder. Why? Because they have a bigger following and can convert more sales.

As much as we don’t want to say it’s the truth, bodybuilding is still taboo. While many people want to get in shape and be muscular, they don’t want the look of a pro bodybuilder — and that’s the hard truth. So, would a supplement brand prefer to give a supplement contract to an up-and-coming bodybuilder or an influencer on Instagram with five million followers? What will provide the biggest ROI?

Bodybuilders Need to Do More

If you’re a pro bodybuilder, you need to think big picture. That flow of money coming in from a supplement contract can be here today and gone tomorrow. Then what? How will you support yourself? The fact of the matter is that unless you are a top-five Olympian, you’re not making much of anything winning shows throughout the year. You’d need to compete often in order to make a living and provide for yourself and your family.

Every single bodybuilder out there needs to start thinking about their personal brand and how they can leverage it. The low-hanging fruit in this instance would be to push heavy on social media. Build a following, come out with apparel, swag, coaching, ebooks, whatever. Start selling things and making another flow of income.

Look at your supplement contract as a flow of revenue that can run dry and something you can’t depend on in the long term.

Shifting back to Blessing, as an example, he can easily move into commercials, television, and the big screen. Obviously, he would need to put in some work and take some acting classes, get an agent, and all those things, but he can leverage everything he brings to the table to bring in new income streams.

Nothing lasts forever, and more and more brands are not looking to give out a supplement contract. So, if you can secure one, get it now, and start planning your next move. In an instant, your bodybuilding career can be over, and you’re left scrambling trying to figure out how to keep a roof over your head and food on your table. Start planning today!