Don’t Weigh Me Cards: Another Excuse for American Obesity 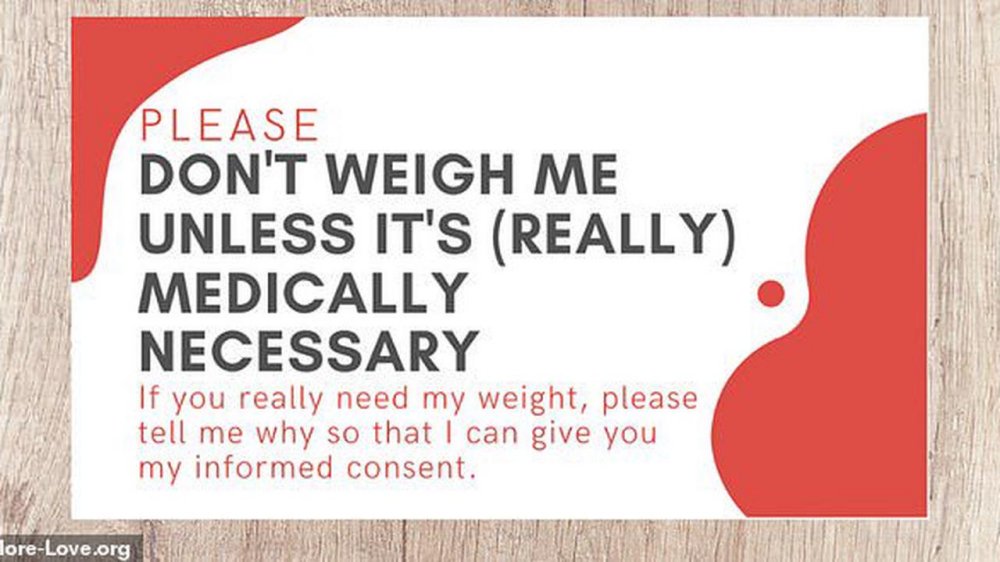 Oh boy, I can hear the triggered alarms going off across the nation already. Listen, if you don’t want to hear the truth, go back to your safe space, pull up your security blanket, and ask the government for some more money. Otherwise, I’m going to give it to you as it is. These Don’t Weigh Me cards are nothing more than another excuse for Americans to brush their weight under the rug and put their earplugs in.

I’d say I’m sorry, but I’m not. You’d think we are in the Twilight Zone with all the insanity swirling around the nation regarding weight. Over 60% of Americans are considered overweight, and of them, more than 40% are considered obese. Know what’s even more frightening? The numbers keep going UP!

Does no one else see an issue with this? Look, I can only personally do something to improve my own health. I can give you all the tools necessary to improve yours, but it’s your job to put in the work. And less and less Americans are willing to do that.

Disclaimer: There are medical conditions that cause weight gain. This article is not directed at those specific circumstances as those are severe conditions that require a doctor’s professional care. The content and opinions in this article are directed at the lazy, complacent, and those who don’t want to take accountability for their health and weight and would rather point the finger at everyone else.

What Are Don’t Weigh Me Cards?

There is a body positivity website (I’m not even going to name them as I don’t want to give them press for such stupidity) who are selling these Don’t Weigh Me cards that read, “Please don’t weight me unless it’s (really) medically necessary. If you really need my weight, please tell me why so that I can give you my informed consent.”

Then on the other side of the card, it reads:

“Why? Because:
• Most health conditions can be addressed without knowing my weight.
• When you focus on my weight I get stressed (and that’s not healthy).
• Weighing me every time I come in for an appointment and talking about my weight like it’s a problem perpetuates weight stigma (a known & serious health risk).
• I pursue healthy behaviors regardless of my weight status (see: Health at Every Size).”

Last time I checked, if you’re at the doctor, it’s either because something is wrong with your health or you’re getting a check-up. Either way, your weight plays a role in your BMI (body mass index), which doctors use to determine if you are considered healthy, overweight, obese, etc. People want to argue that BMI doesn’t work, but that’s simply because it doesn’t account for lean muscle tissue, which the individuals complaining are generally lacking, so their complaint is dismissed.

But let’s discuss each of these reasons listed on the card individually.

“Most health conditions can be addressed without knowing my weight.”

I’ll let them have this one. For the most part, this is actually true. Through bloodwork and other tests, you can determine if a medical condition is improving or not. However, your weight and body fat percentage plays a role in overall health and are things you should be paying close attention to. As your weight and body fat increase, you are at a greater risk for various diseases and illnesses that could be prevented.

Even checking your weight in the privacy of your own home versus the doctor could help lower your chances of disease if you were to actually act upon what the number shows by exercising or moving more throughout the day (along with improving your nutrition).

“When you focus on my weight I get stressed (and that’s not healthy).”

While added stress can increase cortisol levels, the amount of body fat the person may be carrying around has probably already altered their hormones which is further perpetuating adverse health conditions. A doctor mentioning that you should really eat better and exercise more is no different from telling a smoker that they should refrain from smoking cigarettes. Do you see people walking around with “Don’t tell me I can’t smoke” cards? No. Why? Because it’s dumb.

Rather than saying you’re stressed, have you thought about the stress put on the body by being overweight and obese and all the pounding and pressure you’re putting on your joints and muscles? That’s not healthy.

“Weighing me every time I come in for an appointment and talking about my weight like it’s a problem perpetuates weight stigma (a known & serious health risk).”

Sorry, the truth hurts sometimes. Would you rather the doctor tells you that you’re a healthy person just so that you can get some disease down the road and then sue your doctor for lying to you? The doctor is expected to tell you the truth, even if you don’t want to hear it.

People who have this sort of mentality of “how dare you!” talk about someone’s weight are the same people who wouldn’t bat an eye to sue a doctor if they were to tell them what they wanted to hear and then had a heart attack because the doctor refused to say to the person that their weight and body fat are putting them at risk for a heart attack or stroke.

But news flash, your weight is a problem, and that is a known and severe health condition. Stop redirecting blame and accountability. No one told you to be sedentary and eat everything in sight. You should put the fork down and move more.

“I pursue healthy behaviors regardless of my weight status (see: Health at Every Size).”

If you are, good for you. Then you should be seeing some weight loss (which can be determined by hopping on a scale). However, most people are only fooling themselves and are lying through their potato chip-filled teeth. These are the same people who tell everyone they have a gym membership but never go.

And for the love of everything holy, the “health at every size” is a crock of BS. You’re not going to be 300 pounds and 50+ percent body fat and convince anyone that you’re healthy at that size.

The health at every size movement is for the snowflakes who refuse to hold themselves accountable and need a community to surround them to make them feel safe and special. They need others to approve of their poor behaviors, and they all form this fake security blanket around themselves, and when one gets triggered, everyone jumps in to save the person. It’s quite sad.

Don’t Weight Me Cards Are Going to Kill People

By further brushing the obesity epidemic under the rug and finding excuses for why people shouldn’t worry about their weight and health will only make the statistics worse and cause more deaths.

These Don’t Weigh Me cards enable poor behaviors because people think they can flash a card at the doctor, and all their problems will disappear and not be mentioned. All it’s doing is lighting the fuse, and when the bomb goes off within each of these individuals, there’s no coming back from death and no one else to blame.