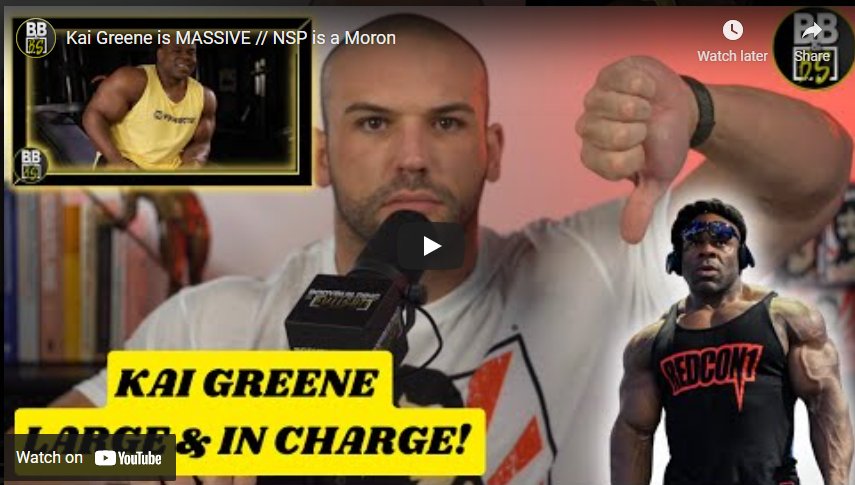 IFBB Pro, Mr. USA Nick “3D” Trigili is on the rise. His channel is blowing up, his tips are second to none, and his view counts are going through the roof. Comments are up, likes are up, and just around 50% of his views are coming from subscribed viewers. This means he can still grow substantially more. His sponsors have changed from Savior to Chicken Pound to Old School Labs, though, he may be working with all of them. One thing’s for sure, he seems to be upping his game every time I check out the channel. In fact, he rarely reads my DM’s anymore, but I get it, he’s super busy and I’m happy for him.

The fact is, the busier you are in this industry, the better! I like the guy and like his unabashed honesty. Whether he’s reporting on fellow Pro’s, supplement company owners, or fellow media personalities, he speaks his mind, with little to no censorship. When it comes to the recent headlines made by RC1’s Aaron Singerman, Trigili was one of the few who reported the news, as it happened.

Marc Lobliner said it best, “Nick is one of the few people not bought and paid for by Redcon.” I mean, no matter what the guy did, he’d get a puff piece on him at RX or NSP. The reason is, they were taking ad money from the company, so there’s no way they’d run a story that was critical of the guy stuffing their pockets. The fact is, Nick has been critical of the supplement mogul since the passing of the late, great Dallas McCarvver, and he’s never apologized for it. You have to respect that. Singerman ROYALLY screwed Palumbo over, back in the day. I worked at RX, but the first chance Dave got to take his money, he couldn’t put that RC1 shirt on fast enough! Trigili could’ve EASILY sold out like that – but guess what, he never has. That earns my respect.

This all comes down to journalistic integrity. If you’re going to call yourself a journalist, you have got to report the truth. Granted, everyone has a different take on what really happened, but there’s a major contrast between writing the truth with a bias and just totally making things up. No one can write from a totally neutral perspective and assuming you could, who the hell wants to see or hear that? That’s how the 5 & 6 o’clock news is. You’ve got anchors who read off teleprompters, with little to no emotion. Sometimes, everything is stagnant. There’s no emotion. They could be reporting about the opening of a new JCPenny, upcoming snow days, and about a tornado that just ravaged an entire city. Their voices stay the same. They don’t laugh, they don’t sigh, they’re just basically robots reading lines. That’s not only tiring to watch, it’s boring. On the flipside, downright lying isn’t much better – it’s actually far worse. And these two variants seem to encompass a lot of fitness media, today. You’re either watching “journalists” read news articles to you – or – you’re watching/listening to fake news with clickbait titles.

That’s been the gripe of many respected journalists with Nick’s Strength & Power. Both myself, and Kevin Grech of EvolutionOfBodybuilding, among others, have knocked Miller for this type of “reporting.” His work isn’t at all his own. He reads from other peoples’ work, often over other peoples’ footage, and he calls that journalism. This is why when Nick [Miller] started pushing theories that Kai Greene was shrinking and/or downsizing to his 1.1 million followers, the unabashedly honest Nick Trigili of Bodybuilding & Bullsh*t, just couldn’t stay quiet. That being said, how Trigili slammed Miller is pretty classic, as well. By only putting “NSP” into the title of his video, he made sure not get clickbait hits. He also didn’t include a hashtag to Miller’s brand on his video description. What he did do was he put a direct link to the guy’s video!!

Would Miller ever do that? Hell no!! Trigili didn’t just rip the most popular YouTuber’s position to pieces, he basically gave his viewers the opportunity to go check out the video on their own and draw their own conclusions. That’s someone who’s very confident in what he’s saying. That’s a real journalist right there!

The truth is, I don’t care for NIck’s Strength & Power. I met him at the 2019 Olympia, when our mutual friend Hector Mendoza of MD thought it cool for us to chat. NSP was friendly in person and we agreed to bury the hatchet. For the record, there wasn’t any animosity. The “ill will,” if you will, was largely over stylistic differences. Ever since the advent of social media, particularly Instagram, many YouTube channels have taken to parroting other people’s updates, as news. Just today, I saw a video from a channel that I really like, with the host reading verbatim from a newspaper article that I read on my own two days ago. That’s a far cry from the time and effort I’m putting into writing a 3-4 page article for Iron Magazine, but to each their own.

I know that if that YouTuber sees this article, even if he thinks it’s about him, he’s not going to block me, trash me, or start to have bad blood for me. He has his way of doing things and I have mine. Nick Miller, however, lashes out at critics, especially at channels like Nick Trigili’s which are growing like wildfire. Despite being the biggest YouTube-based media outlet in the fitness industry, Miller is all too familiar with how his mentor, Luimarco, crashed and burned. During L.U.I’s heyday, no one thought his popularity would ever tank. And that’s just what it did.

While Miller commands a viewership of 1.1 million, he sees someone like Nick Trigili, a Pro Bodybuilder, whose owned businesses and has long standing friendships with key players in the industry, as a major threat. Many of the people who Miller and Trigili call friends, may have widely divergent definitions of what kind of friends these guys are to them.

For example, take a mutual bodybuilder friend of these guys. If one guy says hello and what’s up from time to time to Miller, but has known Trigili since the days they competed as teenagers, who’s eaten with him, trained with him and hung out in and out of the gym with him, which friendship would you say is stronger?

Being an IFBB Pro and a Mr. USA, gives Trigili insights and perspectives that Miller could never truly have, let alone hone in on. He knows that. And he sees Trigii getting bigger by the day. How do you think that makes him feel?

The fact is, Miller doesn’t know what’s really going on with Kai. He’s just screenshotting an IG post and talking over it. That said, most journalists won’t strike out at NSP because they want to kiss his ass or stay clear of him. Nick Trigil, who knows Kai, who was with the same company as him, and is from the same region as The Predator, isn’t about to stay quiet as Miller runs a story that could be factually inaccurate. That one story, from the most popular YouTuber, could affect Kai’s numbers. People might not buy the supps he promotes, they may buy less of his ebooks, and/or alter the way they think of him. A lot of assumptions can be made from a bullshit news report from a source people believe to be credible. This is why it’s so important to know what the hell you’re talking about. Even if NSP saw Trigili’s video, does he really have any kind of rebuttal to offer? Did he approach Kai for comment, did Greene give Miller an exclusive comment? Or did Nick get caught, again, just recycling posts and adding a voiceover?

This article is about a lot more than what’s probably another one, of many, bullshit stories coming from NSP. The writing is on the wall. How long will NSP’s style of journalism be on top – and – who will be the next shot caller in the fitness media world. Could it be Nick Trigili? Could it be someone else? The fact is, whenever bodybuilding fans start to demand more out of their news coverage, then cookie cutter news outlets will start to fade away. Until that day comes, it’ll be business as usual for all parties involved.

What’s your take? How much longer will NSP reign supreme? Does that kind of “reporting” do it for you? And do you think Nick “3D” Trigili will be the next top dog of the bodybuilding media world?