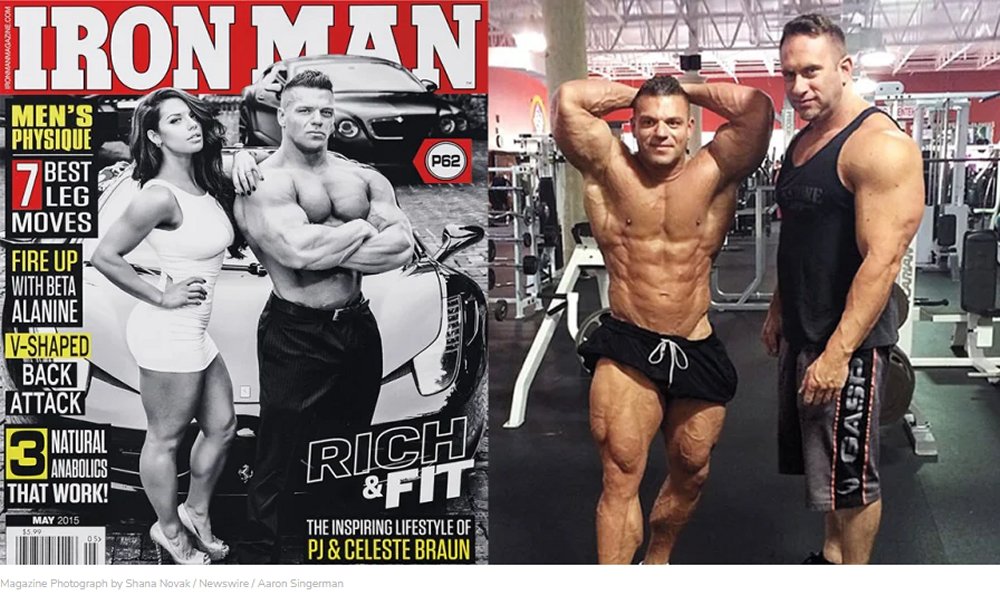 When it comes to shot callers, major players, and O.G.’s in the fitness industry you can’t be more real and more legit than Robert DiMaggio. I’ve known Robert since 2010 and as of 2011 IronMag Labs was sponsoring my site Strength Addicts. That relationship was put on hiatus for a of couple years due to a certain gentleman named Aaron Singerman. Nonetheless, our friendship has always been ironclad and I’ve worked in a variety of capacities from IronMag Labs marketing director focusing on social media and content creation, to a staff writer for IronMagazine, and recently considered to run the IronMag Labs affiliate program. (still pending)

The truth is, I know Robert DiMaggio really well and I know what he’s all about. What’s crazy to me is how few people know who he is today. This is largely attributed to the fact that he’s been involved in two major ongoing battles and he has always been a behind the scenes and introverted type of person anyway. One battle he fought for five full years was a civil lawsuit or a shakedown/extortion scheme and another was the federal indictment that saw the likes of Aaron Singerman and PJ Braun, lamentably having to do serious time (sentenced this past February to 54 months) in federal prison after they both pled guilty to 10 counts/crimes.

Without Robert DiMaggio most people wouldn’t know who Aaron or PJ are and there would be no Blackstone Labs! The world of bodybuilding as we know it might not be the same. And while these are pretty bold statements, IronMag Labs has funded countless websites, programs, and influencers over the past 17 years. And Robert has been a visionary and has brought compounds to the market such as SARM’s (selective androgen receptor modulators), Methylstenbolone (a designer steroid that had never been made before) and many others that were eventually copied by the rest of the supplement industry. Or his patent Method For DHEA Enanthate Processing which unfortunately was never approved and due to financial reasons he had to abandon it. He also trademarked all of the Andro names to protect his brand. Robert’s newest company he founded in 2017 is called Muscle Gelz along with his latest cutting edge topical IronMag Labs Andro Creams.

Back in 2010 and beyond, the company’s watermark was on everything. That’s because Robert isn’t just a businessman he’s also a bodybuilder himself and competed multiple times in his younger years. He loves the sport and believes in giving back. This is why you now see IronMag Labs at Muscular Development, Rx Muscle, Evolution of Bodybuilding, Anabolic Minds and you will continue to see IronMag Labs all over the bodybuilding & fitness industry once again including the 2022 Mr. Olympia in Las Vegas where Robert has lived for the past eight years.

When IronMag Labs had shifted gears in 2017 and brought me on as Marketing Director we put on a robust network of programs that included Gregg Valentino the Rambling Freak, Big Frank Budelewski, the legendary Ric Drasin and a great weekly show featuring two regulars from the Muscular Development forums/boards, in Chris “The Goon” Griffin and “Big” Mike Cox. We also featured Figure champion Jessica Padilla, arm wrestling great John Heynoski and many others. At the time, IronMag Labs was no longer advertising on the major websites, but most of them (except for one!) understood and it was all just business, not personal. After the IronMag Labs TV run came to an end and Robert and IronMag Labs prevailed in the civil lawsuit (Nutrition Distribution vs. IronMag Labs) and he pled guilty to the federal indictment in November 2019, he was once again focused on advertising and pushing IronMag Labs to the limit!

Right now IronMag Labs is back all over the big bodybuilding websites and is once again firing on all cylinders. With that said, a lot has happened and it’s never been more important than now for Robert’s version (the truth) of the story with Aaron Singerman, PJ Braun and Blackstone Labs to be heard. It’s important that fans, consumers and supplement retailers know what’s up and what really happened. If anything, just for historical accountability. Many of the people in this community just simply parrot things over and over again, but have no idea what they’re talking about or what really transpired.

I give major kudos to professional filmmaker and influencer Jon Bravo for asking Robert to do an in-depth interview which will be published on his YouTube channel very soon!. So far all I’ve seen is the teaser video, but for the ten or so minutes available you can see that the full video will be a must-watch for everyone in the industry! After all, there’s a lot of things I know that most people don’t and I feel the Bravo/DiMaggio interview will leave a lot of people floored.

For example, it was Robert’s idea to start Blackstone Labs and being the generous person he is he gave up majority control in order to incentivize his partners and share in the wealth. Remember that Robert founded and funded Blackstone Labs 100% the first two years and spring boarded it with IronMag Labs two best selling products at the time which were Super-DMZ and Methadrol Extreme (both products were discontinued many years ago). He could have easily taken 51% to start and had Aaron and PJ split the remaining 49% however they wanted to. Instead, Robert took 33⅓ with Aaron and PJ taking a third each.

Initially the first couple of years everything was working fine and Aaron and PJ were all over the industry, they put together the sales and marketing for Blackstone Labs and they pushed the brand hard online and through social media. Robert ran IronMag Labs full-time, oversaw IronMagazine, was a partner in a couple of other supplement companies, employed and sponsored numerous people and saw to his other portfolio of investments. Once the FDA warning letters started arriving at Blackstone Labs Robert voiced his concerns and tried to advise his partners as best he could. They listened less and less and sadly Robert became the odd man out. He went from being the guy that both Aaron and PJ looked to for advice and as a visionary of Blackstone Labs and cutting edge products, to a guy they silenced. It got to a point where there were two teams in the Blackstone Labs orbit, Aaron and PJ with 67% and Rob with 33⅓ interest in the company. After a while Robert was basically getting his cut, but had zero say in how the company was ran day to day. Not only that, but he saw the direction Aaron & PJ were headed. He tried to plead with them to no avail and once it became obvious that he couldn’t save the sinking ship, so he sold his shares/interest in Blackstone Labs to them in 2014 and he was out. Many people thought Robert was stupid or made a big mistake, but as we all now know he was actually the smart one and he’s not in prison.

What’s really insane however is that years later Robert found himself in the same indictment as the guys who he tried to save from the fire. He was looking at a lengthy and costly trial, a possible prison sentence and forfeiture of assets. That said, he was indicted for only one count (Conspiracy to Defraud the FDA) therefore, his decision to plead guilty was an obvious one. Interestingly, many people still don’t have all of the facts on what really went down – many still don’t know who Robert DiMaggio really is and believe the lies that were told over and over by Aaron and PJ for many years. This is why the interview with Jon Bravo is so fitting. Although all we’ve seen to date is the teaser video, you can get a feel for the tone of the interview and the fact that both Robert and Jon Bravo mesh really well and like each other which is very important.

You need to have a situation where the interviewer and the guest trust each other, feel comfortable and can speak freely. A lot of times if interviews lack that needed chemistry and trust you can have a situation where the guest clams up, gives vague answers, and/or is otherwise on the defensive. I think the fact that Jon Bravo is such a professional at interviews, that he has such a great channel, and the fact his channel is sponsored by IronMag Labs all contributes to the foundation of an epic production. That said, Jon will ask the tough questions and Robert is the kind of guy who won’t shy away. All of the years I have known Robert he has always been honest, genuine and he always speaks the truth good or bad.

Sometimes the truth can actually be boring, but not here I assure you of that, not here! When people find out what really went down, the person that Robert really is, he is not a rat or snitch and they’re going to have a whole new grasp on the chain of events. Don’t forget that although the verdict and sentences were issued just a few months ago (February 2022), the industry has been living with this case for a very long time. For over three years countless media outlets have laid claim to various versions of what they believed was the truth. Yet, to date none of them have even come close to what actually transpired and why. I for one can’t wait to see the full interview – in its entirety – when it’s released. Be on the lookout for the video and in the meantime, be sure to subscribe to Jon Bravo’s YouTube channel!